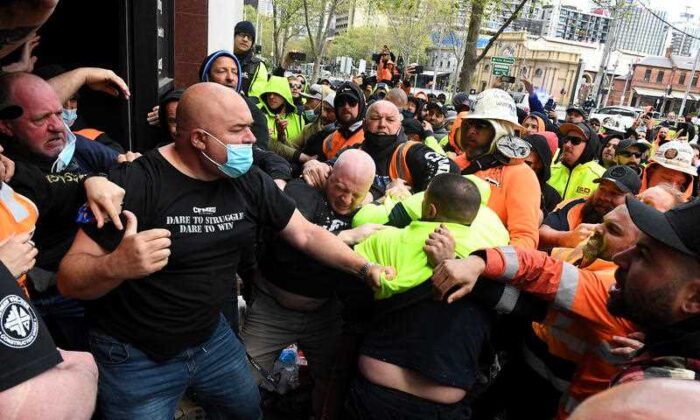 Hundreds of construction workers have called on union boss John Setka to stand down as mandatory vaccination rules take effect across all construction sites in the Australian state of Victoria from Sept. 23.

The move follows a protest held last week where groups of construction workers took their morning tea breaks in the middle of streets in Melbourne’s CBD with chairs and tables as a show of their opposition to government-imposed restrictions on the sector.

However, the protest scene turned violent outside the office of the Victorian CFMMEU offices on Sept. 20, after attempts by Setka to get the protesters to remain quiet while he spoke were unsuccessful.

It is unclear whether all those protesting were construction workers after a message on the Melbourne Freedom Rally Telegram group encouraged anti-lockdown protestors to join the rally.

“Please, everyone, stay calm,” Setka yelled, according to a video posted on Telegram.

“I have never ever said I support mandatory vaccinations,” he said.

Some protesters also urged Setka to either stop COVID-19 restrictions or shut the whole industry down, according to the telegram video.

“We have fought so hard to keep this industry going so everyone can keep working,” Setka responded.

As Setka tried to leave the crowd and enter the CFMMEU building, protesters allegedly hurled bottles and trays at him and other union representatives. A glass door to the building was allegedly smashed at this point.

By 1 p.m., the protest filled both sides of Elizabeth Street, with union delegates standing at the front of the building to stop protesters from entering.

A representative of the protestors was allowed in to meet with union officials just before 2 p.m.

Riot police were later called to disperse the crowds, with police using pepper spray and rubber bullets to move the crowd on.

However, some construction workers have said they would not be deterred and that they will be back every day until their pleas have been answered.

Personnel protecting the entry to the building sought refuge indoors just before 4 p.m. after bottles were thrown at the already smashed glass doors.

Protesters also seemed to be turning against each other, with several small fights breaking out within the crowd of high-vis shirts.

Premier Daniel Andrews told reporters during his daily COVID-19 update the protests were “not smart; they are not safe.”

“This industry is open at 25 percent. We want to get to 50; being vaccinated is an incredibly important part of that.”

“Protests don’t work. Getting vaccinated works, following the rules works. That’s how you stay open, that’s how you get open.”

Liberal Democrat David Limbrick, who attended the protest, told Real Rukshan during a Facebook livestream that the Andrews Labor government’s roadmap was not a roadmap to freedom but “a roadmap to a segregated society in medical apartheid.”

“What we are seeing is people being forced into medical treatments without their full and free consent.”

The union released a statement just after 4 p.m., saying it has always supported freedom of choice regarding vaccination.

“We are not going to be intimidated by outside extremists attempting to intimidate the union by spreading misinformation and lies about the union’s position,” the statement said.

“The CFMMEU will always advocate for safety, jobs, and freedom of choice.”

The construction industry is expected to be shut down for two weeks following today’s protests, News Corp reported.

This report has been updated with more detail.