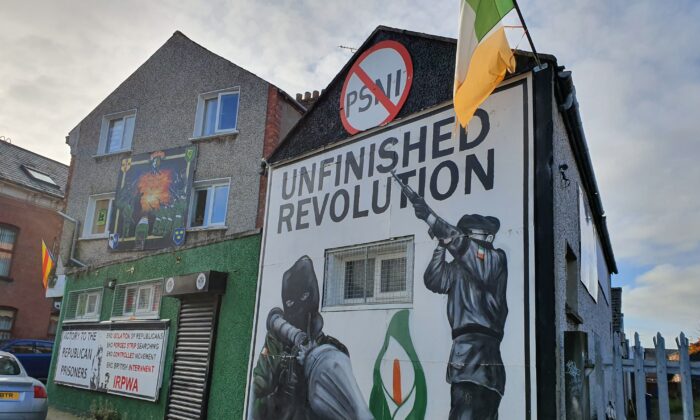 The head office of Saoradh, the political wing of the New IRA, in Derry, Northern Ireland in October 2019. (Chris Summers/The Epoch Times)
UK

Two men accused of being members of the New IRA terrorist group have been remanded in custody by a court in Northern Ireland.

The pair were among four men arrested in west Belfast earlier this week as part of an investigation by MI5 and the Police Service of Northern Ireland, which dates back to 2020.

Ten people already await trial next year after being arrested in August 2020 as part of Operation Arbacia.

The New IRA was one of a number of dissident Irish republican groups which rejected the 1998 Good Friday Agreement—which had been signed by Sinn Fein, the political wing of the Provisional IRA—and threatened to pursue its aims of a united Ireland by violent means.

On Friday, Gary MacNally, 62, from Lisburn, and Joseph Donnelly, 51, from Belfast, appeared in court via videolink from the prison where they are being held.

Belfast magistrates court heard that McNally and Donnelly are both accused of belonging or professing to belonging to a proscribed organisation, directing a terrorist organisation, and preparating terrorist acts.

An unidentified detective chief inspector told the court part of the evidence against them would be audio dating recordings dating from August 2020.

It is alleged McNally and Donnelly directed the activities of the Irish Republican Army and attended meetings in or near Whiterock Leisure Centre in Belfast with the intention of committing acts of terrorism between Dec. 31, 2019, and Aug. 24, 2022.

Neither man entered a plea and the case was adjourned until next month.

The two other men, aged 27 and 30, arrested this week have been reported to the Director of Public Prosecutions.

Assistant Chief Constable Mark McEwan, from the PSNI said, in a statement, this week’s arrests were a “significant development.”

He said: “Despite significant progress against the New IRA, we cannot be complacent in any way about investigating their activities. Those investigations are most effective when police and communities work together.”

“We have witnessed, on numerous occasions, that they are willing to put the lives of local people at risk in their reckless haste to carry out bombings and shootings,” added McEwan.

In April 2019 blogger and journalist Lyra McKee was shot dead by a shooter in Londonderry as she hid beside police vehicles during rioting on the Creggan estate.

The New IRA later claimed responsibility and apologised, saying: “In the course of attacking the enemy Lyra McKee was tragically killed while standing beside enemy forces.”

Friends of McKee protested outside the Derry offices of the New IRA’s political wing, Saoradh, which have since been closed.

Two men—Peter Cavanagh, 33, and Jordan Devine, 21—have been charged with McKee’s murder and await trial.

McEwan said: “We have seen time and time again that the New IRA does not care who they hurt or what they destroy. They do not care about the communities they come from—they care for no one. They are reckless, manipulative and they exploit.”

MI5 is believed to have bugged a number of meetings in Omagh, County Tyrone, and the nearby village of Sixmilecross in July 2020.

Earlier this week a High Court judge rejected a bail request by Amanda McCabe, 51, who has been detained for two years in connection with Operation Arbacia.

She is accused of attending bugged meetings of the New IRA’s high command and planning “extreme levels of violence” and cyber attacks.