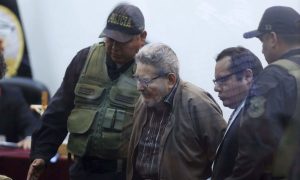 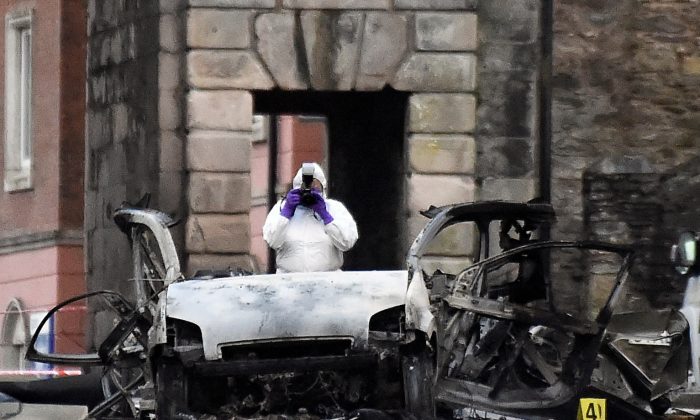 A forensic officer at the scene of a suspected car bomb in Londonderry, Northern Ireland, on Jan. 20, 2019. (Clodagh Kilcoyne/Reuters)
Ireland

Detectives in Northern Ireland believe an extremist group called the New IRA is responsible for a car bomb that exploded outside a courthouse in Londonderry, and are calling the attack an “attempt to kill.”

Two men in their 20s have been arrested in connection with the incident, said officials with the Police Service of Northern Ireland (PSNI).

“Clearly, it was a very significant attempt to kill people here in this community,” Assistant Chief Constable Mark Hamilton said, according to the BBC.

It is understood the bomb was planted inside a pizza delivery van that had been hijacked from a driver shortly before the Jan. 19 blast. The van, with the bomb inside, was left outside the courthouse at 7:23 p.m. local time.

Minutes later, someone called in a warning.

“In the intervening minutes we had already found the car and were starting to evacuate the area,” said Hamilton, according to the BBC.

“Thankfully, the local community and the police service acted bravely together and we got everybody away just in time,” Hamilton said. “But the bomb detonated just as we were leaving the area.”

“Thankfully the attackers failed to kill or injure any members the local community out socializing and enjoying the best of what the city has to offer,” said PSNI Assistant Chief Constable Mark Hamilton in a statement.

Hamilton told reporters Sunday that the main line of inquiry was that a dissident republican group, the New IRA, was behind the Jan. 19 car bomb attack.

“Our main line of inquiry is against the New IRA,” Hamilton was cited by The Mirror as saying, adding that the organization “is small, largely unrepresentative, and determined to drag people back to somewhere they don’t want to be.”

The extremist New IRA is one of a small number of militant groups opposed to a 1998 peace deal that largely ended three decades of violence in the British-run province. They have carried out sporadic attacks in recent years.

Hamilton said he did not see the bombing as an escalation of the extremist group’s capabilities but a continuation of a threat that has been officially at the “severe” level for 10 years.

Authorities evacuated residents, hundreds of hotel guests, 150 people from the Masonic Hall, and a large number of children from a church youth club.

“The people responsible for this attack have shown no regard for the community or local businesses,” Hamilton said. “They care little about the damage to the area and the disruption they have caused.”

Area resident Greg McLaughlin told the BBC that the force of the blast caused his windows to shake.

“It was very, very loud. I knew right away this was a bomb,” he said, according to the report. “We knew it was quite close.”

“You could see the ball of fire on the street,” McLaughlin added. “It sounded to me like a very significant blast. I haven’t heard anything like it in Derry for quite a while.”

“The small number of people responsible have absolutely nothing to offer Northern Ireland’s future and will not prevail,” she said.

Some 3,600 people were killed in the conflict that was fought between mainly Protestant unionists who want Northern Ireland to remain part of the United Kingdom and predominantly Catholic nationalists. Some sporadic violence continues among small, splinter groups but car bombings are rare.

The reported bombing comes as police on both sides of the now-open border between Northern Ireland and European Union-member Ireland have express fears that a return to a hard border after Brexit, complete with Customs and other checks, could be a target for terrorist groups.