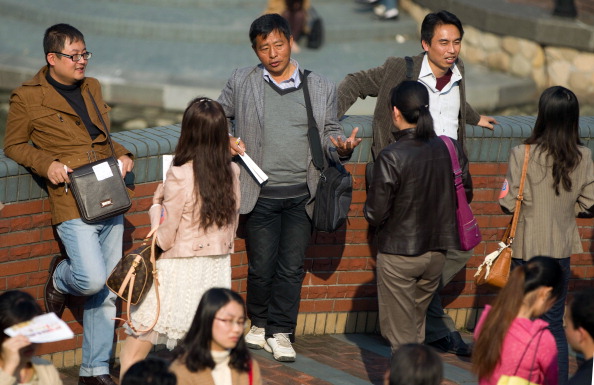 Single men and women gather to chat as thousands of Chinese unmarried people gather at a singles fair organized by a wedding planning agency, to look for their potential mates in Shanghai on Nov. 12, 2011. (STR/AFP/Getty Images)
Chinese Regime

China Has a Bachelor Problem: Millions of Men Will Stay Single for All Their Lives

For decades, the Chinese communist regime strictly enforced its one-child policy, with families that didn’t comply facing heavy fines, forced abortions, and sterilization procedures. In 2016, the regime began allowing families to have a second child (while keeping the heavy-handed enforcement).

But the new policy cannot reverse overnight a crippling social problem bequeathed by the former one-child limit: a large number of bachelors who are unlikely to ever find a wife.

According to the latest estimates by the World Bank, China’s sex ratio stands at 115.4 boys to 100 girls. This imbalance is the result of China’s one-child policy coupled with a deep-seated cultural preference for boys over girls.

Hong Kong-based broadcaster Phoenix Television reported on Nov. 13 that the current gender imbalance means that more than 1 million bachelors will end up being single for the rest of their lives.

The one-child policy has also affected how women choose their spouses.

The Chinese regime’s own numbers, published by state mouthpiece People’s Daily in 2012, suggest the dimensions of the problem are several times greater. There are nearly 12 million bachelors between the ages of 30 and 39, compared to about 6 million bachelorettes in the same age range. In other words, in that cohort, at least 6 million men are expected to remain unwed.

According to the Chinese Academy of Social Sciences, in 2020 there will be 24 million single men looking for a wife.

The preference of male children is a tradition that has long existed in China. A boy is able to pass on the family name, whereas a girl typically takes the husband’s last name upon marriage. In addition, in rural areas, boys can handle the manual labor needed for farming.

With the one-child policy in place, however, many Chinese parents decided either to abandon their babies or have an abortion upon discovering that their child was a girl. According to Chinese state-run news website The Paper, more than 20 million girls have gone unaccounted for in the last 30 years, either through abandonment or abortion.

The one-child policy has also affected how women choose their spouses. With single women in such high demand, they are in a position to choose carefully, often seeking wealthy men with assets. Growing up as only children, they are also used to being pampered and spoiled, and look for the same in a relationship.

According to 2016 research conducted by Zhenai, a matchmaking website in China, more than 80 percent of single females believed that a worthy partner should make a monthly salary of at least 5,000 yuan (about $754), while 67 percent said that a man worthy to become her husband should make between 5,000 to 10,000 yuan (about $754 to $1,510). Twenty-five percent asked for a monthly income of at least 10,000 yuan.

According to an article published in 2015 by Chinese news portal Sohu, which cited a report from Goldman Sachs, there are 150 million Chinese out of the total population of 1.3 billion whose monthly income reached 6,200 yuan (about $936)—a mere 11.5 percent of the population. Half of this elite group is considered China’s middle class, who typically work as public servants or employees at state-run companies.

In other words, these women are out of most men’s league.

The effects of these financial demands were seen in April with the ending of an engagement in Anhui Province. A pregnant woman decided to have an abortion after talks of marriage fell apart, due to her fiancé’s inability to pay 120,000 yuan (about $18,117) as bridewealth, according to Phoenix Television.

The institution of marriage is under strain in China. According to data from China’s Ministry of Civil Affairs, 11.43 million couples registered for marriage in 2016, a 6.7 percent drop from a year earlier. Meanwhile, the divorce rate rose from 1.85 percent in 2009 to 3 percent in 2016, an increase of 38 percent in seven years.

While China has to confront possible social instability as a result of having so many unmarried men, which may lead to the crimes of sex trafficking or the kidnapping of women, the Chinese regime has done little to encourage people to stay married. In fact, the frequent news of sex scandals among Chinese Communist Party (CCP) officials has indirectly encouraged extramarital affairs.

In 2015, the CCP’s anti-corruption watchdog agency uncovered the rampant trading of sex for political favors at China Unicom, a state-run telecommunications company.

Many party officials have engaged in such behavior, including former security czar Zhou Yongkang, who, according to the state mouthpiece Xinhua, engaged in numerous adulterous relationships and exchanged favors for sex. In June 2015, he was sentenced to life imprisonment for graft.

The turmoil in Chinese society regarding marriage can be seen in the steps women are taking to save, or break up, marriages.

In order to save their marriage in the face of a cheating husband, some married Chinese women have decided to enroll in classes to perfect their skills at being a wife, or hire a “mistress dispeller” to end the extramarital relationship.

On the other hand, some young women with limited options to improve their lives enroll in a very different class—one that teaches them how to improve their seduction skills and snag a rich married man.