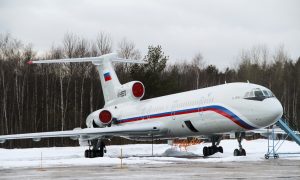 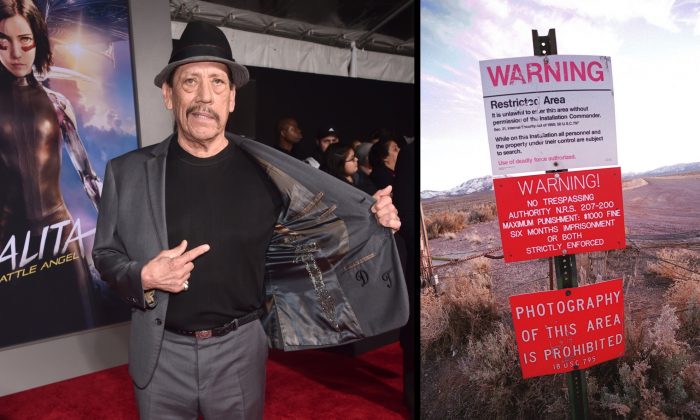 Actor Danny Trejo has jumped on the “Storm Area 51” bandwagon by posting an image of himself holding a glowing machete on social media with the caption, “After leaving Area 51.”

Trejo, whose film credits include “Grindhouse,” “Machete,” and “Machete Kills,” took to Facebook and Twitter on Monday to share a screenshot of himself from his upcoming movie “Machete Kills in Space,” with a caption saying that this would be him after leaving Area 51.

People weighed in with comments, including musings whether the “Storm Area 51” event might be a promo for Trejo’s new film, directed by Robert Rodriguez.

“Y’all, what if this whole thing was really an opening event for the movie???”

Another person commented, “THIS HAS GONE TOO FAR!!! Now please keep going.”

“One of two things will happen,” someone else commented, adding: “1) The biggest massacre of our age, 2) Nothing, because they’ll find Area 51 totally empty and abandoned. No secret elevators, no alien evidence, no nothing.”

At the time of reporting, more than 1.2 million people have now signed up to the “Storm Area 51” event as interest mounts in what appears to be a satirical ploy to raid the secretive military facility and “see them aliens.” Another 1 million people have expressed their interest.

“If we naruto run, we can move faster than their bullets. [Let’s] see them aliens,” the event said in the description of their page, referring to the popular Japanese anime series “Naruto” in which characters run with arms stretched behind them.

According to HuffPost, the page was started by a social media user who goes by the name “SmyleeKun” who is best known “for posting memes and streaming to fans on Twitch,” which is a streaming video platform used by videogamers. While appearing to be a joke, the event has sparked enough online buzz for the Defense Department to take seriously.

Access to the facility remains highly restricted. According to inverse.com, about the closest place interested parties can get to on land to catch sight of Area 51 is Tikaboo Peak, around 26 miles away. But now the hundreds of thousands of “Storm Area 51, They Can’t Stop All of Us” participants appear to want to get far closer.

The assembly point for the Area 51 raiders is Area 51 Alien Center, a restaurant and souvenir shop located near the intersection of US-95 and Nevada State Route 373 in Amargosa Valley. It’s got 3.5 stars out of 5 on Trip Advisor and such glowing reviews on Google as “Such a cute stop in the middle of nowhere!” and “the restrooms are clean & neat” and “had one of those put your head on/in alien figure for photo things.”