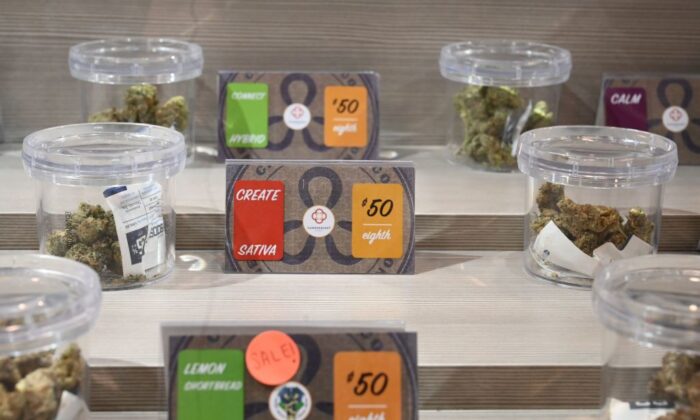 Voters in five states on Nov. 8 will be asked to legalize recreational adult-use of marijuana and join 19 other states where it is legal, including California where marijuana was being sold in this Los Angeles dispensary in January 2019. (Robyn Beck/AFP via Getty Images)
2022 Midterm Elections

Ballot measures related to abortion, marijuana, and slavery are among a diverse array of issues that voters in 37 states will decide at the polls this fall.

An expected flurry of measures related to sports betting and ranked voting failed to qualify for the midterm elections, and there are relatively few related to firearms and Medicaid expansion, which have been common ballot issues over the past decade.

Five abortion-related measures, five that seek to legalize recreational marijuana, and four formally banning slavery as punishment are among 129 proposed constitutional amendments to be decided.

Voters in four states have already cast ballots on five proposals in 2022, with Louisianans to see three in a Dec. 10 special election.

Of the 37 states with proposals on Nov. 8 ballots, voters in 14 will see at least four.

Alabama’s and Colorado’s ballots both have 11 proposals, while 10 will go before Arizonans. Eight proposals are on tap in Louisiana—with the three extra being set for December—and seven are certified for the polls in California.

South Dakotans will see a proposed Medicaid expansion initiative, Oregon voters will see a “Right to Healthcare Amendment,” and Massachusetts residents will be asked if they want to “remove proof of citizenship or immigration status” when applying for a driver’s license.

The Michigan and Kentucky measures will be the most-watched.

The proposed “Michigan Right to Reproductive Freedom” measure would create a state constitutional right to “make and effectuate decisions about all matters relating to pregnancy, including but not limited to … contraception, sterilization, [and] abortion care.”

Kentucky’s “Yes for Life” Amendment 2 asks voters to vote yes or no to a proposed amendment that states, “To protect human life, nothing in this Constitution shall be construed to secure or protect a right to abortion or require the funding of abortion.”

If voters in five states—Arkansas, Maryland, Missouri, North Dakota, and South Dakota—legalize adult recreational use of marijuana on Nov. 8, it will be legal in nearly half of the 50 states.

According to the National Conference of State Legislatures, adult use of marijuana is currently legal in 19 states, while 37 states have legal medical marijuana programs.

New Hampshire became the 19th state to legalize recreational marijuana when lawmakers adopted a 2022 measure allowing cannabis use by those aged 21 and older.

Legalization ballot measures are planned for Mississippi in 2023, and two such measures are collecting signatures for Wyoming’s 2024 ballot.

Earlier this year, as many as 15 legalization proposals across nine states were vying for the ballot, including as many as five in Arkansas.

In Colorado, where voters approved recreational marijuana in 2012, they’ll now vote on Proposition 122, the “Decriminalization and Regulated Access Program for Certain Psychedelic Plants and Fungi Initiative.”

Slavery may be banned under the U.S. Constitution but apparently not in some state constitutions.

Among varied proposals, three Louisiana and two Georgia measures seek property tax exemptions for the elderly, disabled, and veterans, for timber equipment, and in disaster areas.

Arizona’s Proposition 132 seeks to require a 60 percent supermajority to approve any ballot measure that increases taxes.

In Illinois, voters will see Amendment 1, a “Right to Collective Bargaining Measure,” while for voters in Tennessee, a “Right-to-Work Amendment” is on the ballot.

Michigan’s Proposal 2, the “Right to Voting Policies Amendment,” would reduce the requirements for legal voting, and Connecticut’s proposed “Allow for Early Voting Amendment” would allow for early voting in the state, if approved.

Arkansas’s Issue 2 would require a 60 percent supermajority to adopt ballot measures, Colorado’s Proposition GG would require that “income tax effects” be included in initiative analyses, and Arizona’s propositions 128 and 129 would tighten language and title requirements.

Voters in three states will be asked if they want to appoint delegates to a convention to revise and amend their state’s constitution.

Arizona voters will decide if they want to create a lieutenant governor office. In Arkansas and Idaho, proposals would allow the state legislature to call special sessions without the governor’s assent.

Michigan and North Dakota voters will be asked if they want to impose term limits on state lawmakers and, in North Dakota, the governor. A measure tightening residency requirements for state legislators is on the Maryland ballot.

According to the American Gaming Association (AGA), 33 states have legalized sports betting since the U.S. Supreme Court gave states the authority to regulate such wagering in 2018.

With the boom in online and mobile betting, sports gaming revenue topped $4.3 billion in 2021, the AGA reported. Goldman Sachs projects that the market will top $40 billion per year in the United States by 2033.

The “Tribal Sports Wagering Act” is sponsored by a 40-tribe coalition that spent about $25 million promoting the policy, and the “California Solutions to Homelessness and Mental Health Support Act” is backed by seven sportsbooks, including FanDuel and DraftKings, which staked the campaign $100 million.

Florida voters won’t see a measure related to gaming or sports wagering on their ballot, at least not in 2024, until numerous lawsuits are resolved.

Florida lawmakers legalized sports betting when they approved a 30-year gaming compact with the Seminole Tribe of Florida in May 2021.

In exchange for at least $500 million per year, the pact gives the Seminoles’ Hard Rock Digital platform exclusive control of blackjack, craps, fantasy, and sports betting at its seven casinos and on nontribal parimutuels.

The Seminoles launched the site in late 2021, but it has been offline for most of 2022 because of lawsuits.

Several prospective constitutional amendments related to gaming vied for Florida’s 2022 ballot, including one asking voters to approve non-Seminole casinos and one sponsored by a committee supported by DraftKings and FanDuel to legalize sports gaming beyond Seminole casinos.