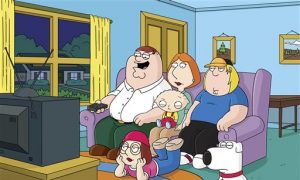 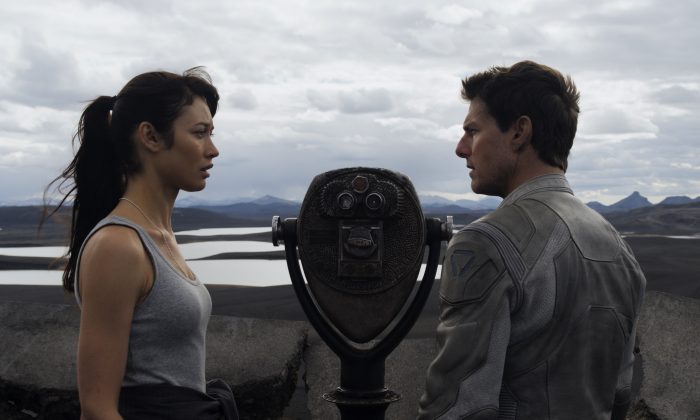 Julia (Olga Kurylenko) provides Jack (Tom Cruise) clues to his past in "Oblivion", an original and groundbreaking cinematic event from the visionary director of "TRON: Legacy"and producers of "Rise of the Planet of the Apes." (Courtesy of Universal Pictures)
Entertainment

The 1970s band Procol Harum wrote the song “A Whiter Shade of Pale.” It’s played in “Oblivion.” It describes the whole movie perfectly.

Shot in whites, silvers, and grays, it’s quite pale. The content is pretty pale too.

Oh, it’ll hold your attention; it’s Tom Cruise and Morgan Freeman after all. Both can command attention. Cruise plays a commander, even. But afterward, you’ll leave the theater feeling a whiter shade of whatever you walked in as.

The year is 2077. Humans have taken up residence on one of Jupiter’s moons. There was a big war. Aliens invaded Earth and destroyed the moon. Gargantuan “hydro rigs” suck up Earth’s resources.

Commander Jack Harper (Tom Cruise) is a “Tech,” a sort of futuristic auto-body mechanic in a silver suit with a silver gun, still on Earth, tending to white spheroid drones that scour the Earth looking for “Scavs” that are possibly left-behind aliens.

Jack lives up in a shiny, white, elevated military outpost with a swimming pool, way up there, in the middle of the air, from which he descends in his cool white jet-copter. He also has a cool white motorcycle, replete with a spelunking winch on the back (because we almost always like Tom Cruise on a motocross bike in a movie).

Victoria (Andrea Riseborough), Jack’s superior officer, tells Jack where to find the downed, dinged drones. He awesomely fixes them with a nonchalant shove of a piece of white bubble gum into the complex drone innards, while reminiscing out loud about the ancient football game that took place in the long-dead stadium the drone happened to go down in.

Jack also has a great little getaway cabin where he plays vintage vinyl. Jack talks to himself a lot.

Pieces of recognizable New York landmarks (Empire State Building, Statue of Liberty) jut out of the pale landscape, half buried.

Now, although Jack’s memory has been erased, he recurrently dreams of proposing to Julia (Catherine Zeta-Jones look-alike Olga Kurylenko) on top of the Empire State Building. This very woman one day crash-lands into his reality in one of those sci-fi, you-sleep-long-time space-pod thingies. It’s a white space pod.

You’ll need to endure a lot of pseudo-military speak: “We have a rogue signal.” “Perimeter check, I may go off com,” and the like.

There’s lots of leaping out of white flying machines and stalking around while pointing the silver gun.

The ideas are not bad, but it’s heady with no gut-check, despite a fairly bombastic score.

It’s difficult to connect with any of the characters to the point of caring what happens to them.

Who are the Scavs, and why does Morgan Freeman’s character, Beech, hang out with them? What’s that mash-up of the “Star Wars” Death Star and the behemoth gestation contraption from “The Matrix”? Is Jack cloned? Why are there a few of him, and which one does Julia love? Is it memory, or is it Memorex?

Why do you feel like you’ve seen all of this before? Where’s WALL-E?

You’ll need to turn a whiter shade of pale to find the answers to these questions.