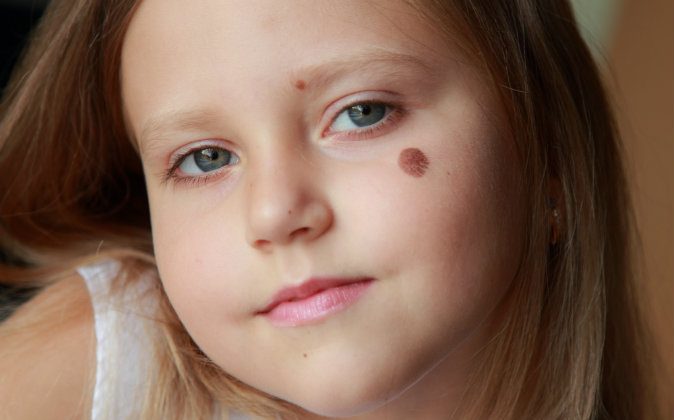 Could birthmarks be left by mental impressions from past lives? (Shutterstock*)
Beyond Science

Dr. Jim Tucker at the University of Virginia had learned through years of studying reincarnation accounts to accept that reincarnation exists—but the strong indications that birthmarks correspond to past-life wounds still puzzled him.

“I didn’t see how a wound on one body could show up as a birthmark on another, even if you accepted the idea of past-life connections,” he wrote in his book “Return to Life: Extraordinary Cases of Children Who Remember Past Lives.”

His mentor and predecessor in reincarnation studies, Dr. Ian Stevenson, had verified many cases. Some children among the approximately 2,000 reincarnation cases he studied recalled their past lives in such detail that they could identify their previous incarnations. Checking autopsy records or going to talk to the families of the deceased, Stevenson learned that the children often had birthmarks that corresponded with great accuracy to the wounds suffered by their supposed past-life incarnations.

An example of a case Stevenson and Tucker worked on together is that of a boy named Patrick in the American mid-west. Patrick had three birthmarks that seemed to correspond with wounds his dead brother Kevin had on his body. Kevin had died of cancer as a child before Patrick was born.

During his treatment, Kevin had a bruised and blind left eye. Patrick had a white opacity covering his left eye and he was essentially blind in that eye. Kevin had a tumor over his right ear. Patrick was born with a nodule above his right ear. Kevin had a central IV line inserted on the right side of his neck. Patrick had a mark on the right side of his neck. Furthermore, Kevin walked with a limp, and so did Patrick. Patrick seemed to remember doing things he’d never done, like living in the family’s old apartment, which Kevin had done. He also named a deceased relative, “Billy the Pirate,” who was murdered and whom Patrick’s mother didn’t even know existed. What he said about Billy turned out to be true. Billy supposedly talked to Patrick in his time between lives.

How Could a Birthmark Travel From One Life to Another?

As Dr. Tucker said, even if one accepts that reincarnation exists, it seems hard to understand how or why a mark would physically appear on the new body.

In his book “Reincarnation and Biology,” Dr. Stevenson cited the example of a young man who had vividly recalled a traumatic experience from years earlier. His arms had been tied behind him during this experience, and as he recalled it, his arms developed what looked like rope marks.

Neuroscientist Joe Dispenza, featured in the documentary “What the Bleep Do We Know!?” has also said a person’s thoughts can have a physical impact on his or her body.

For example, in an experiment, subjects were asked to repeatedly pull a spring-loaded device with one of their fingers for an hour a day for four weeks. The exercised fingers became 30 percent stronger. Another group of subjects was asked to imagine performing this exercise for the same amount of time. Without physically lifting a finger, their fingers increased 22 percent in strength.

Some illnesses, some physical symptoms, are also found to have their roots in the mind. Patient advocate and health writer Trisha Torrey wrote in an article for About.com: “Psychosomatic Illnesses, also called psychophisiologic illnesses (a combination of psychology and physiology), are diagnosed for patients who have physical symptoms, but their origin seems to be psychology based.”

Dr. Tucker wrote: “If the mind continues after death and inhabits a developing fetus, then I could see how the images could affect the fetus. It would not be the wounds on the previous body per se that produced the birthmark or birth defect, but rather the images of the wound in the individual’s mind that did it.”

What Is the Probability of 2 People Having the Same Marks in the Same Place?

The probability of two people having two birthmarks that would correspond to two wounds on another person is 1 in 25,600, according to Dr. Stevenson’s calculations.

Dr. Tucker summarizes the logic: “[Dr. Stevenson] began with the surface area of the skin on the average adult male being 1.6 meters [5.25 feet]. He then imagined that if this area were square and laid on a flat surface, it would be approximately 127 centimeters [50 inches] by 127 centimeters. Since he considered a correspondence between a birthmark and a wound to be satisfactory if they were both within an area of 10 square centimeters [3.94 inches] at the same location, he calculated how many 10 centimeter squares would fit into this body surface area and found that 160 would. The probability that a single birthmark would correspond to a wound was therefore 1/160. The probability that two birthmarks would correspond to two wounds was 1/160 x 1/160 or 1 in 25,600.”

Some had criticized Dr. Stevenson’s calculations, so he and Dr. Tucker asked for the help of two statisticians when working on Patrick’s case.

They expressed interest, but declined. One of them said that calculations would oversimplify the complex situation. He did say, however, that “Phrases like ‘highly improbable’ and ‘extremely rare’ come to mind as descriptive of the situation.”