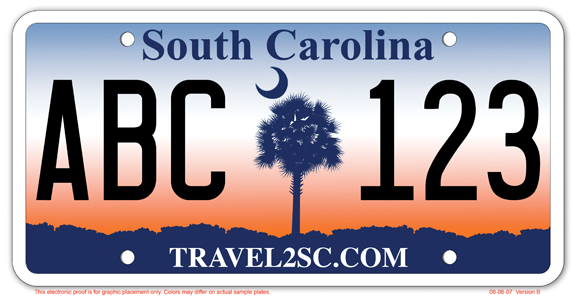 An e-plate proposal in South Carolina is designed to look just like a conventional license plate, with the added advantage of remote adjustment. (South Carolina DMV)
US

E-License Plate: Wave of the Future or Menace?

The latest development in license plate technology is in South Carolina, where lawmakers are considering an invention similar to a Kindle reader.

“It’s the first of its kind,” co-inventor David Findlay told the local CBS affiliate. “It’s not an LCD or an LED. What it’s made of is electronic paper.”

The technology may be new, but the basic idea is not. Other states have considered similar e-plate proposals, but so far none have been accepted.

A big reason is cost. In 2008, Arizona abandoned its e-plate idea once it failed a cost-benefit analysis. The same challenge now faces the South Carolina startup, Compliance Innovations. The company aims to sell each e-plate for under $100 (compared to an average of $5 for the standard metal rectangle), and lawmakers have to determine if the features justify the price tag.

Compliance Innovations boasts a unique power source—their device can hold an image for 10 years using only the vehicle’s vibrations and a solar film.

At the heart of the sales pitch, however, is driver compliance. Inventors say their e-tag can help the state get back some of the $150 million lost every year from drivers who fail to renew their tags or buy insurance.

The e-plate is designed to look just like a conventional license plate, with the added advantage of remote adjustment. Connected via the cellular network, this system allows the Department of Motor Vehicles (DMV) to automatically update driver registration, or alert police with e-plate text if the vehicle is “STOLEN,” a license is “SUSPENDED,” or the driver is “UNINSURED.”

Some details are customizable. The prototype shows warning words in muted tones, but officials can choose bright red or even flashing letters to better identify problem drivers.

According to a company statement, this power to “immediately and visibly revoke a license plate” will force drivers to comply with insurance and registration laws.

If everything goes according to plan, insurance companies will suffer fewer losses, resulting in lower premiums for drivers, and the forced tax compliance will bring increased revenue for the state. However, history has shown that a potentially lucrative idea is still not enough to guarantee e-plate success.

In 2010, California lawmakers considered an e-plate that doubled as a small billboard whenever a vehicle was stopped for more than four seconds. Revenue generated from the ads would not only pay for the plates, but help pay down the state’s debt.

The proposal passed unanimously in the Senate, but concerns about safety and ad content killed the idea soon after it was announced.

Then Gov. Arnold Schwarzenegger threatened to veto the bill if it made it to his desk. In a statement, Schwarzenegger told lawmakers “to focus on passing a budget that lives within our means instead of distracting drivers to raise revenues.”

South Carolina’s e-plate doesn’t suffer from distracting ads, but given escalating fears of government spying programs, it may still be a tough sell. Concerns that the invention would violate privacy and put state plates at the mercy of hackers have already crept into the debate.

Compliance Innovations says that while authorities can change a driver’s e-plate, their system ensures that privacy is protected.

“No one entity could actually track an individual vehicle,” company co-founder Brian Bannister told CBS. “It would require three court orders: to the DMV; to us; and the [cellular] carrier themselves to actually be able to locate a vehicle.”

South Carolina will evaluate the technology in a pilot program using state vehicles.