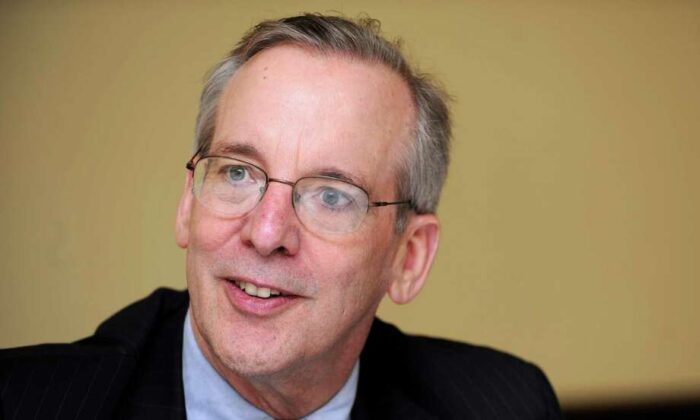 William C. Dudley, former president of the Federal Reserve Bank of New York, in an interview following his speech on regional and national economic conditions to the Business Council of Fairfield County in Stamford, Conn., on July 2, 2013. (Cathy Zuraw/Connecticut Post)
Recession

William Dudley, the former president of the Federal Reserve Bank of New York, wrote this week in Bloomberg, that a recession is inevitable by the end of next year, after warning that the Fed took too long to fight inflation.

Writing in his June 22 Bloomberg Opinion column William Dudley said that in the next 12 to 18 months, the country will inevitably enter a recession, after weakening revenues force companies to lay off workers and the economy will fall into a downturn.

His latest column comes as inflation holds strong and recession fears are hitting a record pitch.

“Much like Wile E. Coyote heading off a cliff, the U.S. economy has plenty of momentum but rapidly disappearing support,” said Dudley adding that “falling back to earth will not be a pleasant experience.”

Real estate companies are already downsizing, while banks like JPMorgan Chase are reducing the size of their home loan departments.

Other big firms are starting to consider hiring freezes and even layoffs in anticipation of a downturn.

Inflation has hit four-decade highs this year after recovering from the pandemic, due to supply shortages, near-zero interest rates, excessive money creation, and government spending.

The Federal Reserve is trying to softly cool the economy in the attempt that raising interest rates will cool off inflation while keeping unemployment low.

The Fed’s target rate for inflation is 2 percent, but the current figure as of May is presently at a high of 8.6 percent.

Fed Chairman Jerome Powell in his meeting with Congress this week and in his earlier June FOMC statement, said that the central bank’s commitment to controlling inflation is “unconditional” and that the U.S. economy is “very strong and well positioned to handle tighter monetary policy.”

He said that the Fed’s move to raise interest rates had led to the recent boost in Treasuries and provided a fresh impetus for defensive stocks to outperform.

“At the Fed we understand the hardship that high inflation is causing. We are strongly committed to bring inflation back down and we’re moving expeditiously to do so,” said Powell.

“We have both the tools we need and the resolve it will take to restore price stability on behalf of American families and businesses.”

Powell told Congress that the Fed expects to make more interest rate hikes and will continue to search “for compelling evidence that inflation is moving down.”

Dudley, who is more pessimistic than his former colleagues, views a hard economic landing as inevitable, with he and the others in the “dove policy” faction, predicting that an aggressive rate hike by the Fed will drive demand too low, thus causing a recession.

“No wonder consumer sentiment has fallen to levels last reached in the aftermath of the 2008 financial crisis, and Google searches for the word ‘recession’ are hitting new records,” said Dudley.

Consumer sentiment is already at its lowest point on record with fears of an economic downturn, due to high gas prices and everyday goods, with millions of Americans already dipping into their savings.

“As inflation outstrips wage growth, the personal savings rate has plummeted, from 26.6% in March 2021 to 4.4% this April, significantly below its long-run average,” commented Dudley.

Although he acknowledges that the Fed is pursuing both 2 percent inflation, while pursuing maximum employment, the latter factor has become “subservient” to the former, said the former vice-chair of the FOMC.

The Fed raised its benchmark interest rate by 75 basis points for the first time since 1994, due to unexpectedly high inflation in May as the reason behind its major rate hike.

The central bank plans to raise its benchmark policy rate to a range of 1.50 to 1.75 percent, and signaled that rates would eventually rise to 3.4 percent by the end of 2022.

The latest economic projection released last week by the Fed, showed that it is anticipating higher unemployment and weaker growth through 2023 than had been expected since its last report in March.

Dudley has pointed to the latest signs that the economy will be facing a hard landing, after the new June data emerged last week.

“From a risk management perspective, better to act now, whatever the cost in terms of jobs and growth. Powell does not want to repeat the mistakes of the late 1960s and the 1970s,” noted Dudley.

The former N.Y. Fed chair believes that the economic recovery will last through 2022, but that rising interest rates will begin tanking demand, as steadily high inflation forces the Fed to continue hiking rates at a breakneck pace, only increasing the likelihood of a downturn.

Meanwhile, Powell still believes an easy or “softish” landing remains a possibility and that while raising interest rates may undo some of the recovery in the employment rate, a slow down in inflation is necessary for the country to “have the labor market that we really want.”

Dudley disagreed, concluding that “if you’re still holding out hope that the Federal Reserve will be able to engineer a soft landing in the U.S. economy, abandon it.”

He warned that based on precedence, every attempt by the Fed to tighten rates that has increased unemployment at least 0.5 percentage points has led the U.S. economy into a recession each time.

However, St. Louis Fed President, James Bullard, a policy hawk, has stuck with Powell, saying that the Federal Reserve must act boldly in raising interest rates in order to contain inflation before higher expectations became entrenched.

“We have to act forthrightly and aggressively to get inflation to turn around and get it under control … or you could suffer a decade of high and variable inflation,” said Bullard, at a June 24 panel by UBS in Zurich, Switzerland.

“This is the early stages of a U.S. expansion … unless we get hit by a bit [sic] shock or something, it would be unusual to go back into recession at this stage.”

Bullard downplayed the risk of recession, saying that rate increases will probably slow the economy down to a healthy pace of growth, rather than tanking it.

The St. Louis Fed chair believes that once borrowing costs rise high enough to put downward pressure on inflation and deflation begins to take place, the central bank would be able to possibly once again cut rates.