A Near Sweep for Trump’s Primary Candidates 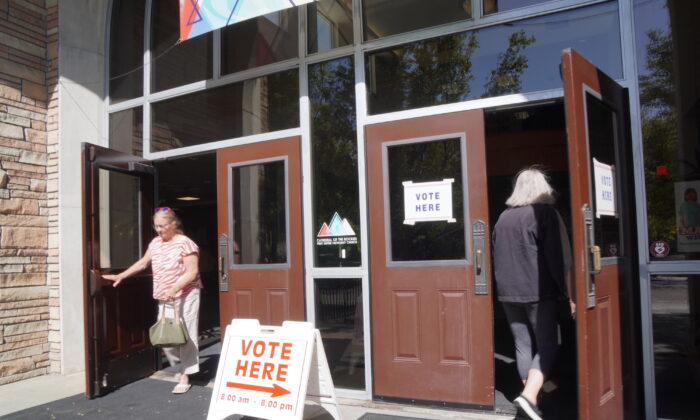 Voters enter and leave a polling location in Boise during Idaho's primary on May 17, 2022. (Allan Stein/The Epoch Times)
By Stu Cvrk

Stu Cvrk
Stu Cvrk retired as a captain after serving 30 years in the U.S. Navy in a variety of active and reserve capacities, with considerable operational experience in the Middle East and the Western Pacific. Through education and experience as an oceanographer and systems analyst, Cvrk is a graduate of the U.S. Naval Academy, where he received a classical liberal education that serves as the key foundation for his political commentary.
View profile
biggersmaller
Print

Contrary to the hopes, wishes, dreams, and “absolutely certain predictions” of the GOP establishment, GOP consultants, Democrats, and their legacy media allies, Donald Trump’s “American First” juggernaut remains the political movement with all the real momentum in 2022.

The primary results in Pennsylvania, North Carolina, Kentucky, and Idaho are in. What must the likes of Mitch McConnell, Karl Rove, and Ronna McDaniel—exemplars of the GOP, GOP consulting class, and GOP political bureaucracy, respectively—be thinking as they assess the results of the May 17 primaries and runoff elections in several states? Their grand plans to neuter the America First movement in the manner used to thwart the Tea Party movement’s candidates a decade ago are going up in smoke.

The ongoing battle royale between the GOP and Trump’s “America First” movement is a clash of ideologies and priorities that will determine the future of the Republican Party and the country. After all, who (other than Democrat activists and grifters of government largesse) would vote for a continuation of Democrat-induced stagflation, open borders, exploding crime, and gasoline prices approaching $5 per gallon in some states?

The GOP positions on important issues are virtually the same as the Democratic Party’s stances for open borders (and pro-H1B visas), free trade/anti-tariffs, endless overseas wars (for example, Ukraine), corporate tax breaks and subsidies, a continuation of a bloated federal government (while claiming that “the GOP can deliver everything cheaper”), and lip service to energy independence, anti-corruption laws, ending vaccine mandates, and election integrity.

GOP candidates campaign on longstanding core Republican principles and issues, and then govern through compromises with Democrats while conveniently forgetting those principles and the campaign promises made to their constituents.

“America First” voters expect their candidates to govern and vote according to campaign promises made, with Trump as the shining example of how that is done.

Going into Tuesday’s primary and runoff elections, Trump-endorsed candidates had won all races in 2022 except one, as reported here: “Following the primaries in Nebraska and West Virginia, President Donald Trump’s record of primary endorsements in 2022 currently stands at 58 wins and just one loss,” according to The Tennessee Star.

Here are the state-by-state results from Tuesday for Trump’s endorsed candidates; the big contested wins are highlighted in additional commentary:

Mehmet Oz (U.S. Senate): As of Wednesday morning, Dr. Oz leads RINO David McCormick by almost 3,000 votes with a recount in the queue, as well as many noted “election irregularities” that need to be investigated. This race was a victim of GOP vote-splitting among several candidates.

Doug Mastriano (governor): Winner! The legacy media are characterizing this landslide winner as an “extreme right-wing conspiracy theorist” who campaigned on investigating the 2020 election and implementing election integrity measures. NBC News has its own special pejorative for Mastriano: “far-right election denier.”

Ted Budd (U.S. Senate): Winner in a landslide! Trump’s endorsement apparently made a big difference in this race.

The Georgia primary (early voting in process) and the Texas runoff elections will be completed on May 24. Here are the Trump-endorsed candidates in those two states:

Trump-endorsed candidates won all but two races on Tuesday, with the U.S. Senate race in Pennsylvania being too close to call.

In Pennsylvania, the pro-election integrity candidate Doug Mastriano won in a landslide, to the dismay of RINOs in the state legislature. They have thus far thwarted real investigations into 2020 election fraud (which are now made even more warranted by the 1,100 mules in Philadelphia identified in the documentary “2000 Mules”). The GOP vote-splitting may end up electing RINO David McCormick in the U.S. Senate race, although Dr. Oz (Trump’s endorsement) holds a slim lead going into a mandatory recount and investigation(s) of “irregularities.”

Janice McGeachin, Trump’s endorsed candidate, lost in a landslide to the incumbent RINO governor in Idaho.

All of Trump’s endorsed candidates won in Kentucky.

Let’s see what happens in Georgia and Texas.