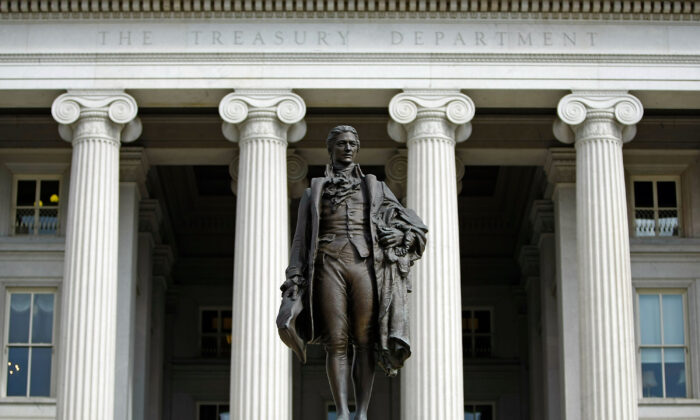 A statue of the first United States Secretary of the Treasury Alexander Hamilton stands in front of the Treasury building in Washington on Sept. 19, 2008. (Chip Somodevilla/Getty Images)
Business Columnists

A Massive Market Returns From the Dead, and You Should Be Glad

It’s the forgotten “master of the investing universe.” Once the most important market on the planet.

U.S. Treasuries have, for decades, been considered the safest, most reliable market in the world. So much so, the yields treasuries paid were referred to as the “risk-free” rate of interest. (They were the basis for how other assets were priced.) And not so long ago, you could actually even earn something for taking no risk.

It goes without saying, the more risk an investor takes on, the more profit they should expect if their investment pays off. Small-cap stocks have enormous potential—if they catch fire and run. Growth stocks (even those with no actual profits) offer huge returns as they focus on growing their markets. Junk bonds pay multiples of their other corporate cousins because the companies issuing them are less than creditworthy.

But U.S. Treasuries? An investment in them was like having your money buried in an underground vault with 15 foot thick concrete walls. There was no more secure place for you to invest.

They were always the safe haven. When any kind of bad news hit the market, there was always a rush to bonds. They called it a “flight to safety.”

Today, the bond market is a bit of an afterthought.

The Death, and Resurrection, of a Market

Since the “Great Recession” of 2008, when the Fed became the Treasury’s best customer (at one point the Fed was buying upwards of 50 percent of any given Treasury issuance), bonds largely became irrelevant.

In the first place, their yields no longer represented the actual market. In a manipulated market—where a government agency is buying tens of billions of your issues every month—that tends to happen. And in the second, they paid $#!% to investors.

Back in the mid-1990s, you could actually earn nearly 7 percent annually for committing your money for 10 years. Today … it’s unheard of. Yields are rallying, but from levels that were, literally, fractions of a percentage.

But bonds are about to get relevant again. And they’re going to start revealing the truth about what’s going on in the markets.

There was a time when the treasury market was a valuable predictive tool.

Shorter-term rates were always more sensitive to policy issues. The Fed would announce a firmer stance to fight inflation and the “short end” of the curve—everything that matured between one month and two years—would react decisively.

The “long end” of the curve—10 years out to 30 years—was always considered the market’s opinion on inflation.

If yields on the short end rallied to match what was being priced at the long end, the yield curve would flatten, the implication being the Fed was on track to stifle economic growth.

This was especially notable if yields at the short end eclipsed long yields. Over the past 40-plus years, every time the yield curve inverted—when two-year rates yielded more than 10-year rates—a recession (indicated in gray) inevitably followed. It was a great indicator to watch.

But that once-effective indicator was neutered when rates were pushed to zero.

If you look at charts of interest rates and bond yields for the past 40 years—everything from the effective Federal Funds overnight rate to the 30-year bond yield—you’ll see an undeniable trend—they’ve all been headed lower.

There’s a reason for this.

The Economy’s Addiction to Cheap Money

It’s because cheap capital has become the lifeblood of the economy. Real economic growth pretty much ceased to be a thing when the dollar decoupled from gold and became a fiat currency—a currency that could be created at will.

Lower bond yields have allowed the Treasury to borrow and spend rampantly in order to create the perception of actual growth.

Today we’re an economy addicted to cheap cash. In an economy where growth in the financial sector has become more important than real economic growth.

Capital has needed to become cheaper and cheaper to keep up this pretense. But once the price of money (interest rates) hit nearly zero, it required some intervention to maintain economic life as we know it.

The past decade has been particularly bad. In 2007, the financial economy, in its quest for profits, nearly brought down the global financial system. And today we may have reached the end game. Perhaps the Fed could have continued its sham supporting the market—were it not for COVID. Shutting down economies crippled the supply chain and now, thanks to billions of dollars in government stimulus injected into the economy, a level of inflation has kicked in the likes of which we haven’t seen since the stagflation era of the 1970s.

Now there’s nowhere left to go. Continuing easy money policies will only fuel more and more inflation. The Fed has been forced to address something that hasn’t reared its head in 40 years. And in doing that, it has to let go of the leash that’s kept interest rates to heel that whole time.

So now the yield curve is being set free. How long it will stay free is anyone’s guess. But smart investors will watch it to get a real sense of where the economy is headed.