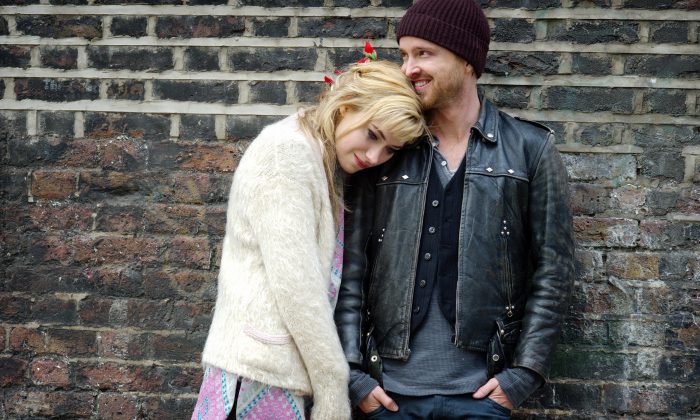 Imogen Poots and Aaron Paul in “A Long Way Down.” (Magnolia Pictures)
Entertainment

‘A Long Way Down’ Is a Short Way to Forgettable

You’re a successful TV personality. With a morning breakfast show. Then—sex scandal! She lied about her age. You do a little prison time, lose the job, the wife. The humiliation is so devastating, you do … what?

Jump off a tall building on New Year’s Eve, right? Because who can deal with that much humiliation for another year? What does this choice tell us about this character? That he shouldn’t try be an American president, for one.

Anyway, Martin Sharp (Pierce Brosnan) goes to jump off a building in London, but a woman crashes his attempt, last minute. She’s got her own New Year’s jump plan. She does ask him if he’ll be long, though.

And then a girl crashes this woman’s jump attempt; a dude crashes the girl’s, and within five minutes, there are four on the roof who would have gone “poof” but for this silly plot device.

What to do? Table the jump until Valentine’s Day (the second most popular suicide day of the year). All in favor? Opposed? Abstentions? They all wait six weeks.

A lot can happen in six weeks. Jess’s (Imogen Poots) nutty boyfriend leaks their story to the press. It’s got excellent scandal ingredients. Martin’s infamy, for one. Jess is the daughter of a politician (Sam Neill). Maureen (Toni Collette) has an invalid son, and JJ’s (Aaron Paul) got inoperable brain cancer.

Hounded by paparazzi, they decide that the best defense is a good offense, get proactive and get their story out there on their own terms. Jess manufactures a story about a Matt Damon-looking angel that saved them. Maureen claims it was a brilliant light.

They’re soon handily stripped of their dignity by a savvy newswoman, on-air. Our suicide posse decides to get out of town for some R&R.

Frolicking in the surf! Group hug! Bonding! Brosnan was a low-on-the-totem-pole James Bond, but we’ll take that Bond over this bonding. Brosnan meanders insincerely through the material.

Granted, said material needed to have a strong directional choice; it should have been either a very black comedy or a serious drama, but it really shouldn’t fall into the realm of an ultra-breezy Brosnan, a facial-tic-overusing Toni, and a pouty, potty-mouthed Poots.

“A Long Way Down” suffers from immense glibness. It should not have groveled at the feet of formulaic, bottom-line entertainment. Why trade a film that could have gained a reputation as a must-watch for those contemplating flying off tall buildings on New Year’s Eve—for weak laughs?

Save your money; watch the 1987 German version of “Wings of Desire,” where angels whisper in the ears of those contemplating suicide, and the whispered-to suddenly find themselves tabling their dates with death. Avoid glib art and fake Matt Damon angels.