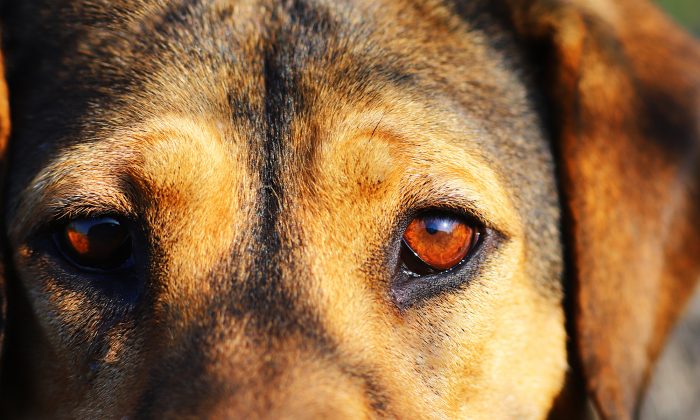 A dog in a stock photo. (Illustration - Shutterstock)
UK

When a 25-year-old woman was riding a bus to college she snapped a photo of a lonely dog traveling by itself in the United Kingdom on Oct. 16.

Gemma Louise Burton posted the photo of the dog on her Facebook.

“This little cutie came on the 620 bus at Bierley Lane to Bradford this morning,” Burton wrote in the post. “If she belongs to you and you’re in Bradford, please, please come to the Bradford Interchange bus station and collect her.”

“She was calm with everybody,” Burton later told TODAY. “When she wandered around on her own, she did whine a little.”

“She wasn’t left on the bus, she got on on Bierley Lane and the driver didn’t realize she was alone.  She’s been wandering around all night and a few people have tried to catch her,” Abbie Medley wrote.

Emma Hudson put up photos of the same dog on Facebook on the same day.

When Hudson was about to take her son to school in the morning, she found a dog standing outside her home.

“This gorgeous girl was outside mine this morning, very timid, wouldn’t come near me except for a sandwich. Unfortunately had to go to get my boy to school, she is on Cedar Close BD4, has a poorly eye, very sweet. Wish I could have got hold of her but she was nervous,” Hudson wrote.

The post was later updated to say “warden has collected her.”

Cliffe Kennels & Rescue posted a photo of the dog, saying that the local council contacted them to pick up the stray.

“The dog taken as a stray from Bradford Interchange after taking herself for a ride on a bus is safe and well in our care,” the animal shelter wrote in their Facebook post.

“We have done our usual due diligence and searches to try and ascertain who the owner is and these will continue.”

Although many people have been interested in adopting the dog, they said they are required to hold the dog for seven days to give the owner time to pick their dog up.

According to Business Insider, the animal shelter named the mastiff cross Olive, and estimated that she is 3 years old.

“The dog has seen a vet and is well except for an eye problem which is now being treated,” they added.

“We would respectfully ask people to wait until the dog is advertised for adoption before asking about her. This will not take place until late next week after a full assessment has been done and will be on our Facebook page.”