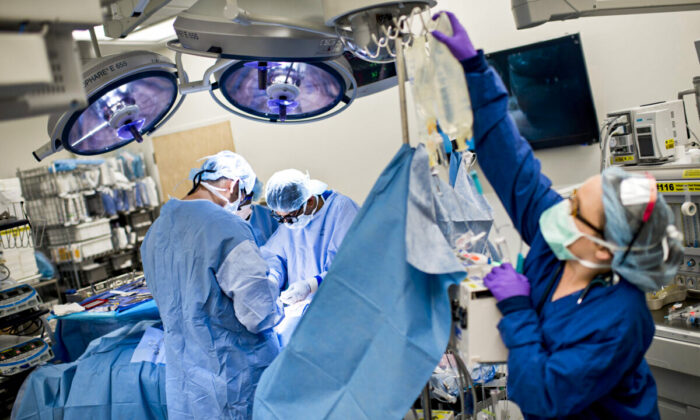 A kidney is sewn into a recipient patient during a kidney transplant at Johns Hopkins Hospital in Baltimore on June 26, 2012. (Brendan Smialowski/AFP/GettyImages)
Critical Race Theory

The majority of America’s top-ranked medical schools are injecting racial politics into the admissions process, according to a review conducted by the medical advocacy group Do No Harm.

The review (pdf), published in August, found that 72 percent of the nation’s top 50 schools and 80 percent of the top 10 schools ask probing questions to determine applicants’ views about diversity, equity, and inclusion, including their positions on things like social justice and health equity.

“Elite medical schools are taking as much of an interest in training advocates for ‘diversity, equity and inclusion,’ or DEI, as they are in training physicians,” the report states. “As this report shows, DEI advocacy begins during the medical school admissions process, long before a student ever sets foot on campus.”

“A review of the admissions process at 50 of the top-ranked medical schools found that 36 asked applicants their views on, or experience in, DEI efforts. Many were overt in asking applicants if they agreed with certain statements about racial politics and the causes of disparate health outcomes,” it continues.

“The goal, it appears, is to turn ideological support for health equity and social justice initiatives into a credential that increases an applicant’s chance of acceptance, to screen out dissenters, and to signal to all applicants that they are expected to support this new cause.”

Among the schools featured in the report is Duke University School of Medicine, which is ranked number six in the country.

The school states that it has been “nationally recognized for its commitment to equity, diversity, and inclusion.”

According to the report, Duke asks prospective students about their “racial and/or ethnic self-description” and asks them to describe their “understanding of race and its relationship to inequities in health and health care.”

David Geffen School of Medicine at UCLA, ranked number 19 in the country, also asks applicants if they consider themselves to be “marginalized” when it comes to access to education or health care, according to the report.

The school itself states that “the core values of justice, equity, diversity, and inclusion are inseparable from our institutional goals of excellence in all tenets of healthcare, research, education, and community engagement.”

The Epoch Times has contacted the schools for comment.

The latest report comes after pharmaceutical giant Pfizer Inc. came under fire for its Breakthrough Fellowship Program, which lawyers say violates the law because it bans white and Asian people from applying.

Pfizer’s program is available to those who identify as “Black/African American, Latino/Hispanic and Native American descent” and is part of a push by the company to “increase diversity by fostering a more inclusive workplace.” Applications make no mention of white or Asian applicants being eligible to participate.

Attorney Adam Mortara branded the program “flagrantly illegal” while Gail Heriot, a member of the U.S. Commission on Civil Rights, told The Washington Free Beacon: “Major corporations seem to have forgotten that there’s such a thing as law,” and that “they seem to think that as long as they’re ‘woke,’ they’re bulletproof.”