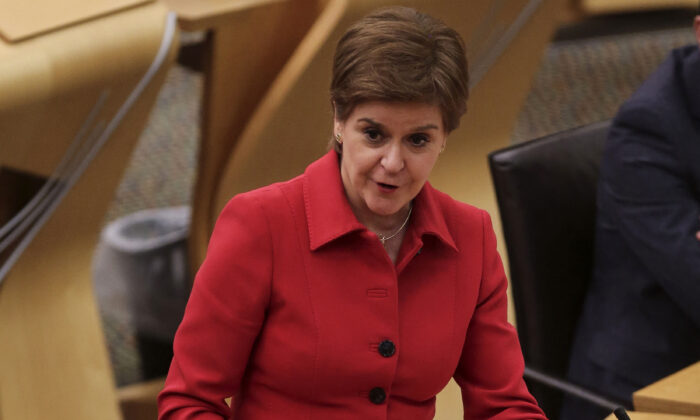 First Minister Nicola Sturgeon gives an update on the COVID-19 situation in the Scottish Parliament in Edinburgh on Nov. 23, 2021. (Fraser Bremner/Pool/AFP via Getty Images)
UK

6 Cases of Omicron Variant Found in Scotland, Some With No Travel History

Six cases of the Omicron CCP (Chinese Communist Party) virus variant have been found in Scotland, the government said on Monday.

Not all of the cases had a recent travel history, suggesting some level of community transmission.

Four of the cases were identified in the Lanarkshire area, with the other two in the Greater Glasgow and Clyde area, according to the Scottish government.

This brings the total number of known Omicron variant cases in the UK to nine, with three cases previously identified in England.

“This will help establish the origin of the virus and any further individuals they have come into contact with in recent weeks,” he said.

Deputy First Minister John Swinney said some of the identified cases had no travel history, with First Minister Nicola Sturgeon later adding that some didn’t have known links with people who did travel to southern Africa.

“At this stage, we know that not all of them have any recent travel history to or known links with others who have travelled to the countries in southern Africa where the variant was originally detected,” Sturgeon said.

“This suggests that there might already be some community transmission of this variant in Scotland. But again let me stress there is no evidence yet that this is sustained nor any evidence from the enhanced surveillance that it is widespread at this stage,” she added.

The first minister urged people to continue to take precautions such as mask-wearing and urged them to “significantly step up and increase compliance” with all existing precautions.

She said it is likely to be a “fast-moving situation,” and that the response will be kept under close review.

The first two Omicron cases in the UK—in Nottingham and Essex—were announced on Saturday, while a third case was detected in the UK on Sunday in a person with travel links to southern Africa and who was no longer in the UK.

The case in Essex involved “some symptoms” but not a serious illness, according to a local official.

Dr. Michael Gogarty, Essex County Council’s director of public health, said the person is “well,” and is isolating with their family.

Investigations are underway to determine how infectious Omicron is, and how likely it may evade natural or vaccine-induced immunisation.

The UK government has restricted travel from 10 African countries—Angola, Botswana, Eswatini, Lesotho, Malawi, Mozambique, Namibia, South Africa, Zambia, and Zimbabwe—and all international arrivals entering England after 4 a.m. on Tuesday will be required to self-isolate for 10 days, unless a mandatory PCR test on day two after arriving yields a negative result.

“We need to work collectively—and effectively—as Four Nations to take all reasonable steps to control the ingress of the virus to the country and then to limit its spread,” the letter reads.

“We are clear that a four-nations approach to issues such as border restrictions is the most effective approach. This requires that a meeting of the Cobra [Cabinet Office Briefing Rooms] committee be held as soon as possible,” it added.

Asked about the proposed meeting, Johnson’s spokesman said “there isn’t one scheduled” currently.

“We obviously speak to our devolved administration counterparts very regularly and we will continue to coordinate our response with them,” he said.

Downing Street also rejected the calls from Sturgeon and Drakeford for the self-isolation period for travellers to be extended until the result of a test on day eight after arriving in the UK, saying it would have a “detrimental effect” on the travel industry.