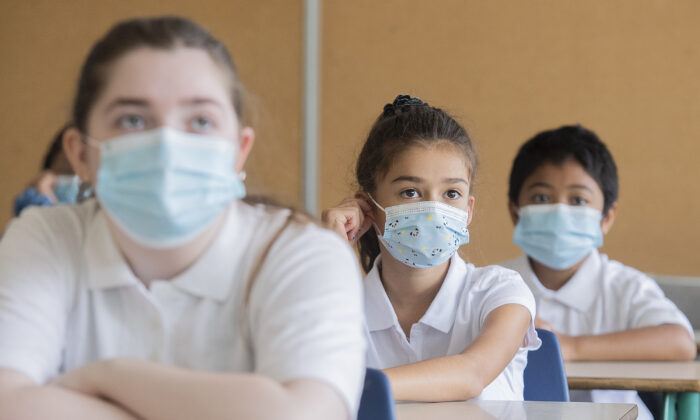 Students wear face masks as they attend class on the first day of school in Montreal on Aug. 31, 2021. (The Canadian Press/Graham Hughes)
Canada

More than half of Canadian parents say the COVID-19 pandemic has impacted their kids negatively, a new report finds.

Released by human resources firm LifeWorks on Aug. 17, the company’s monthly mental health index found that 56 percent of Canadians say their children’s mental health and development worsened over the last two years due to the pandemic.

“When it comes to the disruption and isolations of the pandemic, children’s mental health has been heavily impacted. Understandably, this is having a major impact on parents and families as a result,” said Stephen Liptrap, president and chief executive officer of LifeWorks, in an Aug. 17 press release.

According to the report, Canadian children are facing a range of negative impacts that affect their confidence, the way they interact with others, and their learning ability.

Of the 3,000 respondents who participated in the online survey in preparation for the report, 27 percent of parents indicated that their children experience anxiety about the future.

In addition, 24 percent noticed a decline in their kids’ social development, followed by 23 percent who said the pandemic had a negative impact on their children’s academic development.

Among the children who experienced anxiety, those aged 15 and over have anxiety levels higher than the Canadian average, the report said, adding that the “greatest negative impact” on mental health was reported among children ages 10 to 14.

The report noted only 39 percent of respondents said the pandemic had no major impact on their children, while five percent indicated that the impact has been positive.

Liptrap said it is crucial that organizations put emphasis on parental needs and employee and family assistance programs when considering wellbeing support for staff.

“These resources are critical to ensuring that employees and their families can thrive, which benefits those families, their employers and society in general,” he said.

The online survey by LifeWorks was conducted in English and French from July 7 to July 12, with all respondents residing in Canada and employed within the last six months.