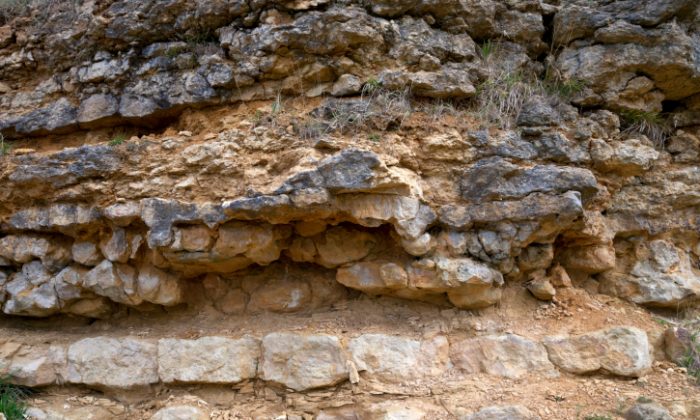 A file photo of a limestone rock formation. An 18th century discovery of man-made objects under layers of limestone is evidence, some say, that humans existed on earth hundreds of millions of years ago and even had an advanced civilization.
archaeology

Workers at a stone quarry near Aix-en-Provence, France, in the 18th century came across a find that remains a mystery.

They dug down through layer upon layer of limestone. In a stratum of sand between the 11th and 12th layers, they found man-made objects that seemed to flout the commonly held timeline for human existence on Earth. The find was recorded in the American Journal of Science and Arts in 1820 by T. D. Porter, who was translating Count Bournon’s work, “Mineralogy.” The article is available online through the Internet Archive, a non-profit organization that makes digital copies of print works.

Though Porter did not give a an age for the objects based on their location, Roy Bainton wrote in his book “The Mammoth Book of Unexplained Phenomena” that the surrounding limestone was dated at 300 million years old.

Porter quoted Bournon: “They found stumps of columns and fragments of stones half wrought, and the stone was exactly similar to that of the quarry. They found moreover coins, handles of hammers, and other tools or fragments of tools in wood. But that which principally commanded their attention, was a board about one inch thick and seven or eight feet long.”

This board was shaped the same as those used by the modern masons and quarry men. It seemed humans had been engaged in similar quarrying work—well before humans were thought to exist let alone use tools.

The wrought, and partially wrought, stones were unchanged, but all wooden instruments had turned into agate, a hard stone.

Porter continued: “Here then, (observes Count Bournon,) we have the traces of a work executed by the hand of man, placed at the depth of fifty feet, and covered with eleven beds of compact limestone. Everything tended to prove that this work had been executed upon the spot where the traces existed. The presence of man had then preceded the formation of this stone, and that very considerably since he was already arrived at such a degree of civilization that the arts were known to him, and that he wrought the stone and formed columns out of it?”