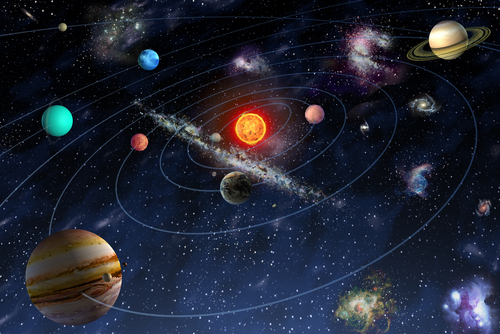 A diagram of the solar system. (Shutterstock*)
Science

3 Amazing Coincidences in Our Solar System: What Could They Mean?

1. Ancient astronomy seems to predict knowledge of atoms only discovered in 1913

The traditional ordering of the planets, common thousands of years before Moseley’s discovery, corresponds to the order of elements Moseley discovered.

The planets and the sun and moon are listed in the chart according to the traditional ordering.

This coincidence is featured in the book “A Little Book of Coincidence in the Solar System” by John Martineau.

2. Patterns within the stars and galaxies appear to line up with the direction of our sun’s motion

Dragan Huterer, a physics professor at the University of Michigan and a theoretical cosmologist, explains in an Astronomy article how some patterns observed in the universe are either astounding coincidences or are signs of a structure beyond science’s current understanding of the solar system and the universe.

He looks at cosmic microwave background, which is a snapshot of the early universe.

Photons, protons, and electrons swarmed in a dense mass in the early universe. That mass was then released to travel through the cosmos. Huterer describes the cosmic microwave background as “a fog of microwave photons coming at us from all directions, filling the entire universe.”

An analysis of the warm and cool spots of this fog reveals basic patterns. These patterns show certain alignments that have less than a 0.1 percent likelihood of happening by chance, says Huterer.

Kate Land and Joao Magueijo of Imperial College in London have, for example, found some enigmatic temperature alignments within the cosmic microwave background and also alignments with the motion of our sun through space.

“They have humorously dubbed this odd alignment—apparently the same one we found—the ‘axis of evil,’” says Huterer.

He writes: “Many cosmologists find the various CMB [cosmic microwave background] alignments extremely unlikely to have occurred by chance. Moreover, nearly all the alignments point to the solar system’s motion or the orientation of the ecliptic plane. Is there a deeper explanation?”

An example of a map of cosmic microwave background temperatures, with blue showing colder temperatures and red showing warmer. (NASA)

This coincidence is also featured by Martineau; the measurements were verified by Epoch Times.

Is the Moon Man-Made?

13 Crazy Coincidences That Could Make You Believe in Fate

*Illustration of the solar system via Shutterstock