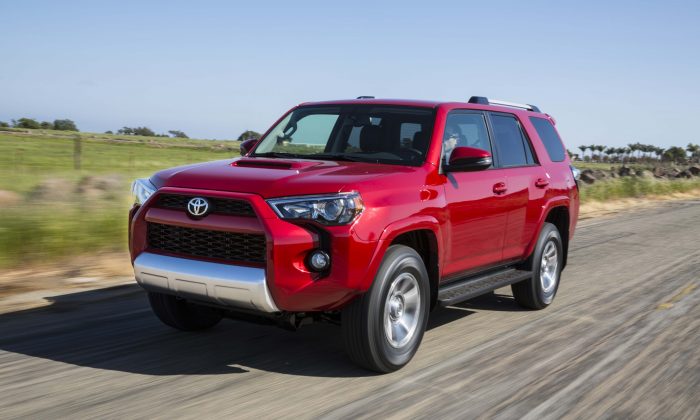 Every inch of the 4Runner is built with off-road ability. It has an aggressive exterior, while underneath the striking new front end lies a reinforced body-on-frame construction. The spacious interior and new Entune Audio System keep you comfortable, no matter how rugged the terrain outside.

I would like to report I spent several days in the Sahara driving the 4Runner from oasis to oasis, constantly battling blowing sand and darting camels. But I didn’t. Maybe finding a yet undiscovered ancient Mayan temple deep in the jungled Yucatan. I didn’t do that either. Nor did I provide relief supplies to the East Coast as Hurricane Arthur ripped up the coast all the way to Nova Scotia. I had none of these experiences, but I had the vehicle for it. Up to 9.6 inches of ground clearance, and an approach angle of 33 degrees on the 4Runner made it possible.

To help negotiate uncertain terrain, 4Runner has an electronically controlled locking rear differential that distributes engine power evenly to both rear-wheels. They move at the same speed, even if one is off the ground. It provides a predicted output to help you maintain a controlled pace over obstacles.

Just because your adventure is not in the Scottish Highlands or you’re not cutting a road parallel with the Amazon River in your 4Runner doesn’t mean you have to give up proper navigation, music, and connectivity. 4Runner Trail has the Entune Premium Audio with navigation and App Suite housed together in one system that includes a 6.1-inch high resolution touch-screen display and integrated backup camera display, and AM/FM CD player with MP3/WMA playback capability with six speakers. The SiriusXM Satellite Radio is offered with 90-day all access trial. You don’t have to be foraging in Bangladesh or on the run from the Texas Highway Patrol to enjoy these all-terrain features.

A power rear glass allows you to grab anything from the cargo area in a snap. Instead of opening the rear liftgate, just lower the power rear glass with a push of a button. The Sliding Cargo Tray can support up to 440 pounds and makes it easy to reach to your gear. It also doubles as sheltered seating—great for camping or chilling out at the ball park of your favorite NFL team.

4Runner’s powerful engine lets you tow up to 4,700 pounds, allowing you to bring plenty of gear or accessories.

The EPA fuel economy is 18 mpg city and 21 mpg highway. I averaged 22 mpg under all my driving conditions.

Just because the 4Runner is rugged in personality doesn’t mean it lacks care when it comes to safety and peace of mind. There is a driver and passenger Advanced Airbag System featuring driver and front passenger (thorax, abdomen, pelvis, knee, and side) airbags, and roll sensing front and rear side curtains. A tire pressure monitor system issues a warning if the pressure becomes critically low.

So whether you need to load up camping gear or just move the kids to college, the 4Runner split and fold versatility lets you make room for everything (40/20/40 fold flat). By folding one or more seats down it frees up to 90 cubic-feet of cargo space.

There is a no-cost maintenance plan guaranteeing 2-years or 25,000 miles, whichever comes first. Your new Toyota will be covered for all normal factory scheduled maintenance as well as 24/7 roadside assistance.

I didn’t drive the 4Runner off road for an adventure. But I moved my grandson back home after four years of college, making two trips with every nook and cranny in the 4Runner filled to capacity. Now paying for the college will be an adventure.

June was a special month for my wife and I as we both celebrated birthdays. We entertained some at home but we also went out several times. We went to see Les Miserables at the Wyly Theatre. When we gave the key to the parking attendant there was nearly a fight over who was going to park the 4Runner. Everyone wanted to drive my car. The next day we went to a local bistro for lunch. We sat at a window table and watched passersby slow down and look longingly at our 4Runner.

Durhl Caussey writes a car column read around the world. You may reach him at this paper or durhlcaussey@gmail.com.