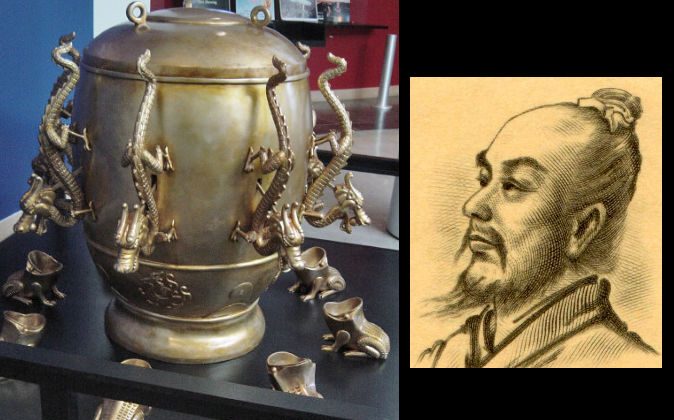 A replica of an ancient Chinese seismoscope from the Eastern Han Dynasty (25-220 A.D.), and its inventor, Zhang Heng. (Wikimedia Commons)
Beyond Science

In 132 A.D., Zhang Heng presented the Han court with the world’s first seismoscope. A 2005 replica was even said to detect earthquakes with the same precision as modern instruments.

Historical accounts tell of its great accuracy, though its precise design remains a mystery. The outer appearance and functioning is known for certain, but its inner workings remain open to speculation. The replicas have been built on the best guesses from such speculation.

The most common theory states that a pendulum inside the copper urn would move when an earthquake occurred, even if the quake was hundreds of miles away. The pendulum would hit a system of levers to open the mouth of one of the eight dragons on the outside of the urn. Each dragon’s mouth contained a bronze ball. This ball would roll out, landing in the mouth of a toad figurine below, making a loud clang.

A historical account described the ringing in the toad’s mouth to be so loud it could rouse the whole court from sleep, wrote Dr. Jan Pajak of the Wellington Institute of Technology in a paper prepared for the 2005 International Conference on Sensing Technology.

The dragon that had its mouth opened would be the one pointing in the direction of the earthquake. The eight dragons pointed east, west, north, south, northeast, northwest, southeast, and southwest respectively.

The invention was initially met with skepticism in its day, though Zhang was already a renowned scientist, selected to be the court’s chief astronomer. In 138 A.D., a bronze ball sounded the first alarm.

It indicated that the earthquake happened west of Luoyang, the capital city. No one had felt a quake in Luoyang, so the alarm was ignored, but a few days later, a messenger from west of Luoyang arrived in the city to report that his region had experienced an earthquake. The earthquake had occurred at the same time Zhang’s machine sounded the alarm. This city of Longxi, some 300 miles away, lay in ruins.

Feng Rui and Yu Yan-Xiang of the Institute of Geophysics, China Earthquake Administration, deduced in 2006 that this first earthquake detected by Zhang’s machine was magnitude 7 in Longxi, with an epicenter at Tianshui on Dec. 13, 134 A.D.

The machine’s purpose was to detect earthquakes in distant regions so aid could be deployed. It worked until the death of its inventor, but apparently the device was so complex only Zhang could keep up with its maintenance effectively.

The seismoscope was called Houfeng didong yi, the “instrument for measuring the seasonal winds and the movements of the Earth.” Modern attempts at replication have met with varying success, and all were built on the use of inertia, a principle integral to modern seismographs.

Dr. Pajak explains this use of intertia: “In this principle an earthquake shakes a frame of an instrument, so that this frame is displaced in relation to an inertial pendulum, while this displacement is registered as the indication of an earthquake.”

In 1939, Japanese scientist Akitsune Imamura built a replica showing the device to be effective, according to Hong-Sen Yan in the book “Reconstruction Designs of Lost Ancient Chinese Machinery.”

However, wrote Hong-Sen, “in some circumstances the direction of an earthquake’s epicenter was found to be at right angles to the dropped ball.”

In 2005, several scientists from various disciplines at the Chinese Academy of Sciences, the National Museum, and China Earthquake Administration declared a new replica to be the best yet.

“It represents our current utmost understanding of the ancient Didong instrument,” said Teng Jiwen, a research fellow at the Institute of Geology and Geophysics, according to a report from that time by state-run media People’s Daily.

The replica reportedly responded to the reproduced waves of four actual earthquake events in Tangshan, Yunnan, the Qinghai-Tibet Plateau, and Vietnam. Tested against modern earthquake graphs, the replica was shown to be accurate and its shape fit that described in historical texts.

Hong-Sen cited a passage from a contemporary biography of Zhang, the first design specification left to us in historical texts: “There is one pillar (du zhu) in the center of the interior and eight transmitting rods near the pillar.”

Transmitting rods would refer to channels through which some object would be transported, explained Hong-Sen, but nothing more specific is written about the rods.

Dr. Pajak has another theory. He wrote that the machine has been described in historical texts as containing water, as having water flow out of the dragons’ mouths like a fountain.

He hypothesized that the water flowed smoothly (as opposed to turbulently), a characteristic known as laminar flow. The shape of the chamber (parabolic) was designed to deflect vibrations coming from the earthquake zone. The deflected vibrations would focus on the inlet of the pipe in the appropriate direction, causing the water that had been washing around the metal ball to push the ball out of the dragon’s mouth.

Robert Reitherman, executive director of the Consortium of Universities for Research in Earthquake Engineering, expressed skepticism concerning the historical accounts of the machine’s accuracy in his book, “Earthquakes and Engineers: An International History.”

He wrote: “At a close distance, the whole instrument would be so severely shaken that the balls on multiple perches would have jostled loose. … At a [far] distance, ground motion from an earthquake does not leave clear footprints indicating the direction from whence those vibrations came, because the ground shakes in various directions rather chaotically by the time it reaches the instrument.”

If this machine worked as well as historical accounts describe, and if the successes of some modern replicas hint that the machine could work with such precision, it seems Zhang’s genius remains out of our grasp for now.

Some of Zhang’s other accomplishments include calculating pi (π) as being between 3.1466 and 3.1622, refining a time-keeping device know as an “inflow clepsydra,” and applying hydraulic motive power to rotate an astronomical instrument known as an armillary sphere.