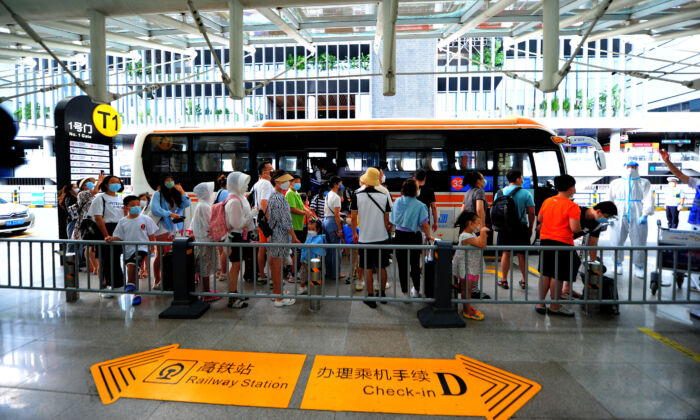 The Chinese regime repressed protests in Hainan after 150,000 tourists were stranded on the island province under the COVID-19 “zero-tolerance” policy. Eventually, the regime reopened the airports on Aug. 15 and allowed some travelers to leave.

The regime suspended all flight, train, and ferry services across the Qiongzhou Strait in the province on Aug. 6, as a measure to curb a COVID-19 outbreak that began on Aug. 1. Small batches of tourists had were allowed to leave the island by charter flights on Aug 9.

Chinese Vice Premier Sun Chunlan revealed on Aug. 13 that about 150,000 tourists were stranded on the island. On that day, she ordered the provincial regime to allow the tourists to leave, with conditions, and the other provincial regimes to accept the residents who are returning home.

“Hainan province must evaluate the risk and launch strict measures to guide travelers to leave the island,” Sun said. “[The tourists] must be transferred from point to point.”

The precondition to leaving the island includes the traveler hasn’t been in contact with anybody who was diagnosed in the previous two weeks. A “point to point” transfer means the people won’t be in contact with anyone who is not from Hainan when traveling from the island to their hometowns. They will be quarantined as soon as they arrive at their destination.

Beijing’s “zero-tolerance” policy has scared local officials. They will be dismissed if the region they manage has COVID-19 outbreaks or if an outbreak worsens. On the evening of Aug. 14, three officials from Hainan were dismissed and placed under investigation after the island reported nearly 1,200 new infections.

People suffer from the “zero-tolerance” policies. They have been locked at home, face skyrocketing food prices, and lack various supplies since Aug. 6. Tourists are not allowed to leave in general and have to pay for the expensive hotels.

On Aug. 13, tourists stuck in different hotels started to protest in front of the hotels or on the hotel grounds. They shouted: “Let us go back home!”  The protesters were quickly repressed by police officers.

The door of a hotel in Sanya was sealed by police on Aug. 14, after a tourist protest, Hong Kong pro-Beijing MingPao reported on Aug. 15. The report said that 11 of the hotel staff were diagnosed with COVID-19 early on Sunday and the regime told the tourists who were stranded inside the hotel that they had to stay inside the hotel for another 10 days to make sure they were virus-free. There were British citizens among the protesters.

Outbreaks Around the Country

The Chinese government has reported that COVID-19 spread broadly and infected more people in Tibet, Xinjiang, Qinghai, Zhejiang, Jiangxi, Fujian, Guizhou, Yunan, Shandong, Beijing, and Shanghai in the past days, and has caused tragedies.

Shoppers in the IKEA Shanghai Xuhui store experienced a big escape on the evening of Aug. 13.

While people were shopping inside the store, the security staff locked the doors because a person suspected of having COVID-19 had visited the store. Shanghai people remembered that they were locked down in stores, restaurants, gyms, factories, or stadiums for days in April when the city launched a three-month lockdown this year.

Fearfully, some shoppers screamed and rushed to the exit, pushed open the doors being held by security, and finally escaped.

The shoppers who couldn’t escape, were locked inside the store until the early morning of Aug. 14. They posted on Chinese social media that they were loaded onto buses around 12:3o a.m. and shipped to different quarantine centers without knowing when they could go back home and how much the quarantine would cost them.

In Tibet, the outbreak expanded from Lhasa, Shigatse, and Ngari, to Lhoka, Nagqu, and Nyingchi.

It’s unclear when the regime will lift the lockdown in the cities with reported COVID-19 outbreaks. It has been difficult for people to travel around China since the first outbreak started in Wuhan in January 2020.