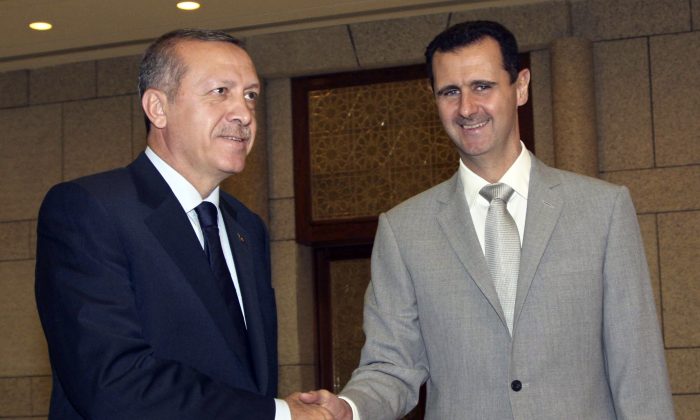 Turkey took fresh steps this week toward mending relations with Egypt and Syria, which since the 2011 “Arab Spring” and its tumultuous aftermath have been characterized by mutual hostility.

“We may reevaluate relations with the countries we have problems with,” Turkish President Recep Tayyip Erdogan told reporters while attending a G-20 summit in Bali, Indonesia, in November.

“We can reset relations with them after [the] June elections,” he added, referring to the Turkish presidential and parliamentary elections scheduled for next year.

However, on Nov. 20, Erdogan met with his Egyptian counterpart, Abdel-Fattah el-Sisi, on the sidelines of the opening ceremony of the FIFA World Cup in Doha, Qatar. A handshake, in the presence of Qatari Emir Tamim bin Hamad Al Thani, highlighted the first meeting between the longtime antagonists.

After the meeting, Erdogan called for “further contacts” with Egypt at the ministerial level.

According to Oytun Orhan, an expert on the region at Ankara’s Center for Middle Eastern Studies, the Turkey–Egypt normalization process has been in the works “for some time.”

“The handshake in Doha was the culmination of this gradual process and will no doubt lead to further diplomatic breakthroughs,” he told The Epoch Times.

Turkey–Egypt relations have been practically non-existent since 2011, when Ankara backed popular uprisings across the Middle East and North Africa—including a full-fledged revolution in Egypt.

Relations bottomed out in 2013 when the Egyptian army, led by el-Sisi, ousted and imprisoned Mohamed Morsi, Egypt’s first democratically elected president, in a bloody military coup.

A member of Egypt’s now-outlawed Muslim Brotherhood, Morsi died suddenly in a Cairo courtroom in 2019 amid claims he was being denied medical care.

Since the 2013 coup, Erdogan and his Islamist-leaning Justice and Development Party, ideological cousins of the Muslim Brotherhood, had staunchly refused to recognize el-Sisi as Egypt’s legitimate president.

Tentative steps towards reconciliation were taken in early May when the two countries’ deputy foreign ministers met in Cairo for “exploratory discussions.”

According to a statement issued after the meeting, talks focused on “necessary steps that may lead towards the normalization of relations between the two countries, bilaterally and in the regional context.”

Since then, the normalization process appears to have moved rapidly.

Orhan, for his part, attributes the move to pressing foreign-policy issues of concern to both countries.

“For one,” he said, “both sides feel the need to coordinate on security arrangements in Libya.”

Since the death of Libyan leader Muammar Qaddafi at the height of the Arab Spring, Turkey and Egypt have backed opposing sides in the North African country’s ensuing power vacuum.

Egypt and Israel are both home to vast offshore reserves of natural gas, which Ankara would like to see funneled to Europe through Turkish territory.

Notably, Ankara has also recently restored ties with the United Arab Emirates and Saudi Arabia, both of which took hardline anti-revolution positions during the Arab Spring.

According to Orhan, these recent developments reflect a “wider trend of diplomatic normalization” now taking place throughout the region.

“All these countries still disagree on a range of issues,” he said.

“But they understand that this doesn’t preclude cooperation and normalized ties.”

‘No Room for Hard Feelings’

Recent weeks have also seen signs of budding rapprochement between Ankara and Damascus following a decade of animosity.

“Just as Turkey-Egypt relations have begun to normalize, this can also happen with Syria in the upcoming period,” Erdogan said on Nov. 27.

In remarks broadcast by Turkey’s TRT television channel, he added, “When it comes to politics, there’s no room for hard feelings.”

For the past 10 years, Turkey and Syria have remained bitter foes, with Ankara supporting armed anti-government organizations in Syria that Damascus regards as terrorist groups.

Ankara severed ties with Damascus in 2012 as the conflict in Syria became increasingly violent. In the decade since, Erdogan has repeatedly called for the overthrow of Syrian President Bashar al-Assad.

Assad, however, has managed to remain in power, largely due to the continuing support of Russia and next-door Iran.

Russian troops have been deployed in Syria since 2015, when Damascus formally requested Moscow’s help in combating foreign-backed rebels and Jihadist groups.

But Turkey’s tone vis-a-vis Syria changed perceptibly in August when Erdogan expressed the need “to take steps” with Damascus.

“Diplomacy between states can never be entirely severed,” he said.

Shortly afterward, Cavusoglu went even further, saying there would be “no preconditions” for holding talks with Assad.

The apparent shift in Turkey’s position on Syria first appeared after an Aug. 5 meeting in Sochi between Erdogan and his Russian counterpart, Vladimir Putin.

At the meeting, Putin reportedly urged Erdogan to “cooperate” with Damascus in the fight against “terrorist groups” operating in Syria.

“In terms of Turkey–Syria normalization, the Russian factor can’t be discounted,” Orhan said.

“Moscow has asked Turkey to engage with Assad, and it’s also likely that Moscow has urged Damascus to reciprocate.”

Since mid-November, Turkey has been using aircraft and artillery to strike positions in northern Syria associated with the Kurdish YPG militant group.

The strikes have come in response to a Nov. 13 bombing in Istanbul that left six people dead and scores injured.

Ankara blames the YPG, the Syrian offshoot of the Kurdistan Workers Party (PKK), for the deadly attack.

Turkey, a NATO member, along with the United States and the European Union, regards the PKK as a terrorist group.

Despite its close association with the PKK, the YPG is backed by Washington, which uses it as a bulwark against the ISIS terrorist group.

Since 2016, Turkey has carried out three major offensives into northern Syria with the stated aim of protecting its 565-mile border from attacks by the PKK and its Syrian affiliate.

On Nov. 28, TRT reported that Turkish army units near the Syrian border had completed preparations for a fourth ground offensive.

According to Orhan, Russia—which maintains troops in northern Syria—may try to persuade the YPG to vacate the border area in hopes of averting the Turkish operation.

“Removing the YPG from northern Syria, and filling the vacuum with Syrian regime forces, may represent the best solution for both Turkey and Russia,” he said.

“Ankara isn’t entirely satisfied with this formula, but Moscow appears to be pushing for it.

“If the YPG refuses to leave—and it probably will—it will face the full brunt of another Turkish offensive.”