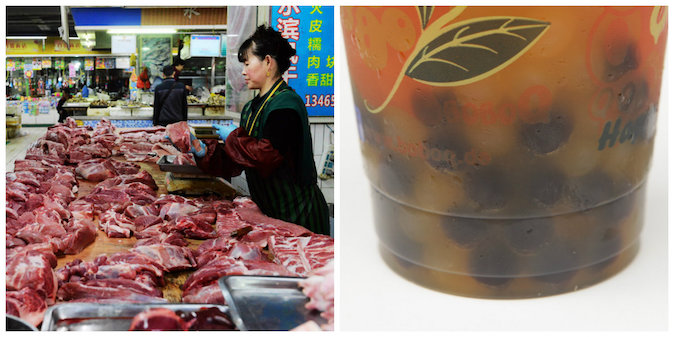 China has been dogged by food scandals for years, and 2015 was no exception.

Fortunately for those in the United States, most of the problematic food appear to be sold only in the Chinese domestic market.

Still, with Food and Drug Administration inspectors examining 1 percent or less of food imports each year, there’s no guarantee that adulterated food won’t make it to America’s shores.

Here are five major incidents of toxic or fake food found in China in 2015.

This bizarre case is so off-putting that the Chinese official tasked to do the inspection “almost threw up” upon making the discovery.

In June, local officials in the south central Chinese province of Hunan busted a smuggling ring, and stumbled upon frozen pork, beef, and chicken wings from the 1970s, according to Chinese state media. To put that in context, Mao Zedong, Hunan’s most notorious native, was then still alive (but on his last legs) and helming the destructive Cultural Revolution.

The smugglers, which ran a countrywide meat racket worth over $480 million, used unrefrigerated trucks to transport the meat in and out of the Chinese border. The “zombie meat,” as state mouthpiece People’s Daily put it, was refrozen before being sold to potential customers.

Somehow, bubble tea shop owners in the eastern Chinese province of Shandong conspired to turn the popular drink’s raison d’être into its most unappealing, and definitely indigestible, component.

In October, a reporter from a Shandong television station found, upon undergoing a CT scan, that the overly chewy tapioca pearls she swallowed with a cup of bubble tea from a local shop were left undigested in her stomach. Scientists at the local university failed to identify what the “pearls” were made of, but they agreed that it was “highly sticky.”

The Shandong station did covert interviews, and one unsuspecting bubble tea shop owner spilled the beans: the “pearls” were fashioned at a chemical factory from old tyres and the soles of leather shoes.

While shrimp are supposed to be soft and chewy, in the southern port city of Guangzhou, some large shrimp have been found to be overly so.

Reports of gel-filled shrimp went viral on the Chinese Internet after mainland media reported the news in October. Unscrupulous food vendors were found to have injected their shrimp with gel to make them look bigger and weigh more. These giant shrimp could then be sold for a higher price in the market.

Thus far, the samples of doctored shrimp that were analyzed found to be injected with edible gel.

It is unclear if any of the gel-injected shrimp found their way into the U.S.: 90 percent of shrimp that Americans consume is imported, but mainly from India, Indonesia, and Ecuador.

In January, Chinese police announced that they had seized over 1,000 tonnes of contaminated pork and 48 tonnes of cooking oil produced from this meat after cracking down on more than a 100 people suspected to be involved in the shady, countrywide operation.

The suspects had reportedly bought diseased pigs cheaply off farmers, before turning them into ham, bacon, and cooking oil.

Infant milk powder formula manufacturers in China must operate on the dictum: even if it’s broken, don’t fix it.

In June, Chinese food safety authorities found huge amounts of nitrates—a potential carcinogen when present in excessive quantities in food—in samples of milk powder from three manufacturers in the northwestern province of Shaanxi.

Milk powder has been a sensitive issue in China ever since 2008 when it was found that about 300,000 infants fell ill after consuming products contaminated with melamine, a toxic substance. At least six died.

Since then, Chinese citizens have resorted to buying or having relatives ship powdered milk from abroad, a phenomenon that has been a boon to the industries in countries like Germany and Australia.