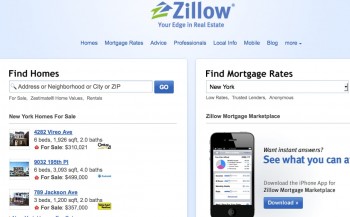 Homepage of Zillow Inc, an online real estate information startup company. Zillow has jumped into the initial public offering (IPO) frenzy and seeks to raise up to $48.5 million in stock. (Screenshot from zillow.com)
Business & Economy

The Seattle-based company, in a Securities and Exchange Commission filing this week, will price its shares between $12 and $14. Assuming a $13 per share initial offering, the share sale estimates the value of the firm to be around $350 million.

Zillow, through its website, has listings of homes, mortgage rate calculator, home buying advice, and offers other services.

Although the company has incurred significant losses since its inception, it trimmed its losses down to $6.8 million last year, from $12.8 million in 2009 and $21.2 million in 2008. Its number of “Premier Agent” subscribers have also shot up—with 10,710 at the end of March, a 32 percent increase from the end of last year. The company sells targeted advertising based on customers’ home zip codes.

The most highly anticipated upcoming IPOs may be microblogging site Twitter Inc. and social networking platform Facebook Inc. Twitter is planning to go public later this year, and Facebook may file an IPO in 2012.