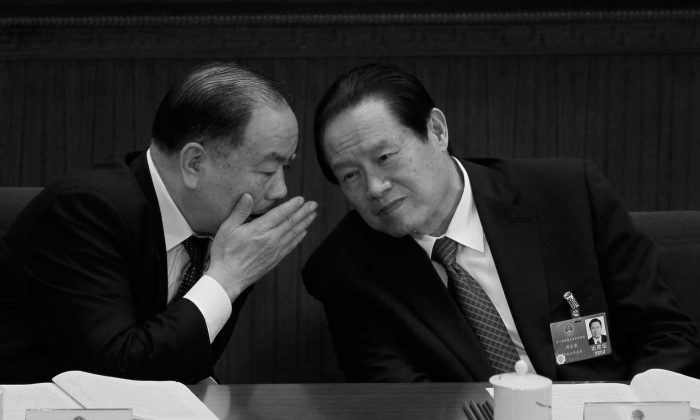 Before Zhou Yongkang's arrest, many of his associates were first to go. (AP Photo/Ng Han Guan)
Epoch China Blog

The Chinese regime wanted to build a case against Zhou Yongkang. During investigations, they got more than they bargained for.

Former security czar Zhou Yongkang was recently expelled from the CCP for a long list of crimes and is now being subjected to judicial review by the Supreme People’s Procuratorate, Party’s top prosecutor’s office.

Although Zhou’s expulsion was officially announced on Dec. 5, the Central Commission for Discipline Inspection (CCDI) had earlier revealed the news to provincial Party Committees on Nov. 12, Hong Kong publication Cheng Ming reports. According to CCDI documents, Zhou’s case is complex, and involves a broad and deep range of issues.

The documents also say that 521 of Zhou’s associates were detained in November. 13 people have escaped arrest because they have either fled the country or have gone missing. These include Xiao Xia, Zhou’s aunt, Liang, Zhou’s personal assistant, and three of his mistresses.

Earlier, Hong Kong media report more than 200 officials of assistant provincial Party Committee and above rank are either directly or indirectly connected with Zhou. These officials were either personally promoted by Zhou or his inner circle, who took efforts to form close ties with them through a relationship of benefits.

Zhou’s expulsion is the latest development in an on-going power struggle between two factions, one headed by Chinese leader Xi Jinping and the other led by former paramount Jiang Zemin.

However, Jiang’s faction failed because of a betrayal by former police official Wang Lijun, who is believed to have exposed the conspiracy when he tried to seek asylum at the United States Consulate in Chengdu.