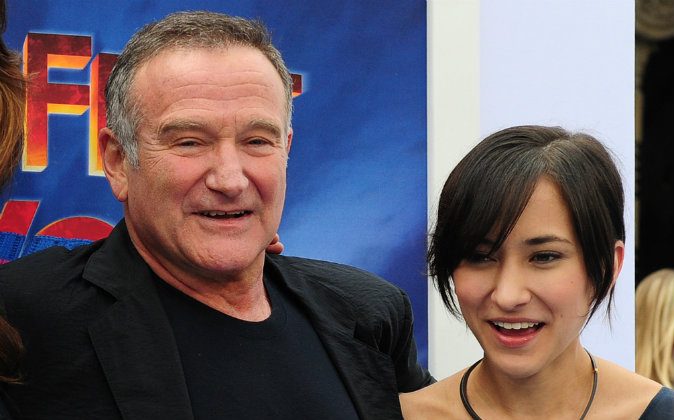 Actor Robin Williams and his daughter Zelda pose on arrival for the world premiere of the movie 'Happy Feet Two' in Hollywood on November 13, 2011 in southern California. Happy Feet Two will presented in RealD 3D and IMAX 3D, and also in 2D, on November 18, 2011. (FREDERIC J. BROWN/AFP/Getty Images)
Social Media

Who are actor Robin Williams’ kids? Williams, 63, died on Monday of an apparent suicide.

There is an on-going investigation into the cause of his death, but it is believed that it was death by suffocation due to a suicide.

Zachary “Zak” Pym, born on April 11, 1983, is Williams’ first and only child from his marriage to Valerie Velardi.

Robin Williams with his son Zack and wife Marsha arrive at the premiere of ‘Death To Smoochy’ at the Ziegfeld Theater in New York City. (Photo by Scott Gries/Getty Images)

Not much information is known about Zak Williams, 31. His mother, Velardi, and Williams divorced in 1988.

The most well-known of his children is Zelda Williams, a film and television actress.

Williams named his daughter after the popular video game, The Legend of Zelda, a game he really enjoys.

“Hours on hours would go by and we’d become completely immersed in the epic adventure,” said Williams.

“My favorite part was solving the puzzles.

“I loved exploring every room to find secret passages and hidden objects.

“I vividly remember the sound the doors would make when they opened.”

Zelda and Williams would feature in a television commercial for The Legend of Zelda: Ocarina of Time 3D together in 2011.

Williams and his daughter also starred along side each other in the movie House of D.

Actor Robin Williams and his daughter Zelda Williams arrive at the screening of ‘House Of D’ during the 2004 Tribeca Film Festival May 7, 2004 in New York City. (Photo by Matthew Peyton/Getty Images)

In a Twitter post, Zelda said that The Legend of Zelda: Majora’s Mask is a favorite game of all time.

Williams was pronounced dead at his home in Northern California Monday, officials in Marin County said. The sheriff’s office noted that a preliminary investigation shows the cause of death was suicide due to asphyxia. Sources later told TMZ that Williams died from hanging himself.

“This morning, I lost my husband and my best friend, while the world lost one of its most beloved artists and beautiful human beings. I am utterly heartbroken,” said his wife, Susan Schneider, in a statement. “On behalf ofRobin’s family, we are asking for privacy during our time of profound grief. As he is remembered, it is our hope the focus will not be on Robin’s death, but on the countless moments of joy and laughter he gave to millions.”