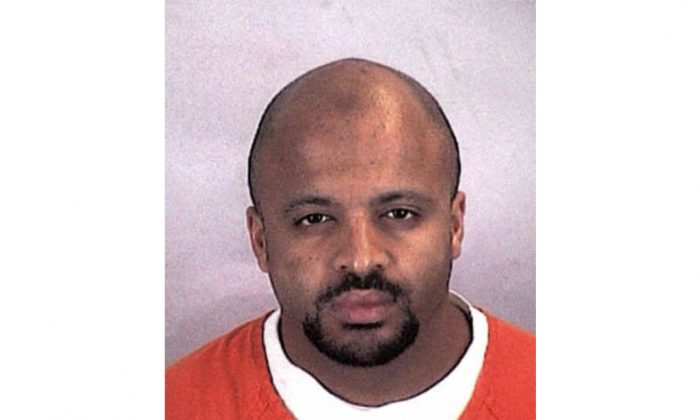 In this undated file photo provided by the Sherburne County Sheriff Office, Zacarias Moussaoui is shown. Claiming that he can offer inside information about al-Qaeda that could support claims against Saudi Arabia and financial institutions, Moussaoui says he wants to testify in lawsuits filed by victims of terrorism. Some lawyers have taken him seriously enough to interview him at a maximum-security prison in southern Colorado. But others have questioned his motives. (AP Photo/Sherburne County, Minn., Sheriff's Office)
Crime and Incidents

NEW YORK—The man who became known as the “20th hijacker” from the Sept. 11 attacks wants to testify in lawsuits filed by victims of terrorism.

The imprisoned Zacarias Moussaoui recently wrote to federal courts in New York and Oklahoma, claiming he can offer inside information about the inner workings of al-Qaeda to boost legal claims that the government of Saudi Arabia and financial institutions supported terrorism.

Some lawyers have taken him seriously enough to interview him at the Supermax federal prison in Colorado, where he is serving a life sentence. But other observers are skeptical, saying it could be a desperate grab for leniency or relevancy.

“Even if he somehow got to the point where he could testify, there would be a credibility issue,” said Carl Tobias, a professor at the University of Richmond School of Law. “Would his testimony be valuable? That’s doubtful.”

The offers are also clouded by his record of changing his account of his involvement in the Sept. 11 plot and his erratic behavior in court.

In court papers filed in Manhattan in September, lawyers for Saudi Arabia said flatly: “The Kingdom of Saudi Arabia had no role in the attacks of September 11, 2001.” They also noted that the United States “has said often and vigorously that Saudi Arabia is an important ally in the fight against terrorism.”

Even so, his attempts to cooperate in the civil cases stand in contrast to the defiant attitudes of other al-Qaeda defendants who have endured after years of confinement without volunteering information except for claims they were tortured.

Moussaoui, who is 46 and refers to himself in writing as “Slave of Allah,” has been a curious character from the moment he was arrested on immigration charges in August 2001 after employees of a Minnesota flight school became alarmed that he wanted to learn to fly a Boeing 747 even though he had no pilot’s license. He was in custody on Sept. 11 and pleaded guilty in April 2005 to conspiring with the hijackers to kill Americans.

The plea initially seemed to subdue the mercurial Moussaoui, who during a three-year legal fight repeatedly insulted the judge and tried to fire his lawyers. But his combustible side re-emerged at his death penalty proceedings, when he surprised everyone by testifying that he had planned to pilot a plane into the White House on Sept. 11.

One psychologist called by his defense lawyers testified that he believed Moussaoui had paranoid schizophrenia. Moussaoui mocked the testimony, shouting as he left courtroom, “Crazy or not crazy? That is the question.” Jurors ultimately spared his life.

Last month, lawyers in a federal lawsuit against Saudi Arabia were permitted to interview Moussaoui in prison. What was said can’t be shared publicly until the U.S. government finishes sifting through the transcript, ensuring it contains no secret messages that could pose a threat to Americans.

“I will say that we believe it was relevant and material to our case,” said Jerry S. Goldman, a lawyer who participated in the interview of Moussaoui.

Moussaoui also wrote to the clerk in federal court in Brooklyn in September, saying he had seen a report on Fox News about another suit accusing the Jordan-based Arab Bank of helping finance suicide bombings in Israel. He said he was willing to testify, but the plaintiffs never took it seriously.

The communication wasn’t relevant to the Arab Bank case and “don’t make clear what his motives are,” said one lawyer, Gary Osen. “I don’t know his state of mind at all.”

At Supermax — known as the “Alcatraz of the Rockies” — Moussaoui is subject to restrictions requiring screening of any attempt to communicate with the outside world. However, there are exceptions for court filings.

The most sensational Moussaoui filing is a four-page handwritten letter dated Oct. 23 and docketed this month in federal court in Oklahoma City. In it, Moussaoui claims that a Saudi prince helped him financially in 2001 when he was studying at a flight school in Norman, Oklahoma, and also funneled a large amount of money to some of the 19 men who hijacked planes on Sept. 11. Fifteen of the 19 hijackers were citizens of Saudi Arabia.

The prince “was assisting me in my Islamic terrorist activities … and was doing so knowingly for Osama bin Laden,” he said.

Moussaoui described how bin Laden got the religious instruction necessary to go forward with the terrorist attacks from Saudi religious leaders and carried them out over the objections of the Taliban. He also claimed he shared information this year with a Secret Service agent about a 1990s plot by al-Qaeda to shoot down Air Force One and assassinate then-President Bill Clinton and first lady Hillary Rodham Clinton with assistance from a top Saudi Embassy employee.

He asked an Oklahoma judge to let him testify in open court about what he knows and to assign him lawyers. Late last week, a magistrate judge in Oklahoma City recommended that the request be denied because his testimony isn’t in support of a pending case there.