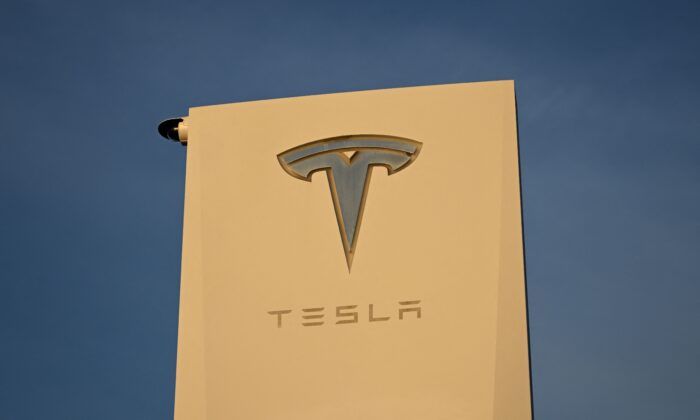 The Tesla Inc. logo is displayed on a sign outside the Tesla Design Center in Hawthorne, Calif., on Aug. 9, 2022. (Patrick T. Fallon/AFP via Getty Images)
Business & Markets

YouTube, which is owned by Alphabet Inc, has removed videos that showed Tesla Inc drivers conducting Full Self-Driving (FSD) testing using children instead of mannequins in the driveway.

According to CNBC, a video was posted on Aug. 14. The footage showed that a Tesla owner, Tad Park, drove a Tesla Model 3 vehicle towards one of his children on the road in the San Francisco Bay Area.

On YouTube, the video was originally posted by a channel named Whole Mars Catalog, which is run by Omar Qazi, a shareholder of Tesla.

The safety test aimed to determine if a slow-moving Tesla vehicle is equipped to avoid colliding with pedestrians. In these tests, children were used as pedestrians standing or walking on the road.

Talking about the removal of the video, CNBC quoted a YouTube spokesperson saying, “YouTube doesn’t allow content showing a minor participating in dangerous activities or encouraging minors to do dangerous activities. Upon review, we determined that the videos violate our harmful and dangerous policies, and as a result, we removed the content.”

Tesla’s FSD Beta program has been ongoing for almost two years and has expanded to over 100,000 vehicles without a reported mishap.

In the United States, Tesla is marketing its driver assistance systems, and the FSD option would cost around $12,000 or $199 per month.

Earlier in March, Tesla fired an employee after he posted a video on YouTube of his car running into a traffic pylon while using FSD.

Last year, in October, the regulator expressed concern about reports that participants in an FSD early-access program had been subject to non-disclosure agreements that discouraged portraying the feature negatively.