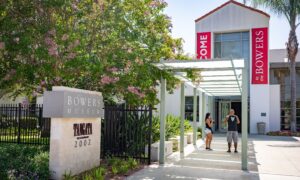 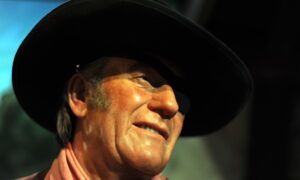 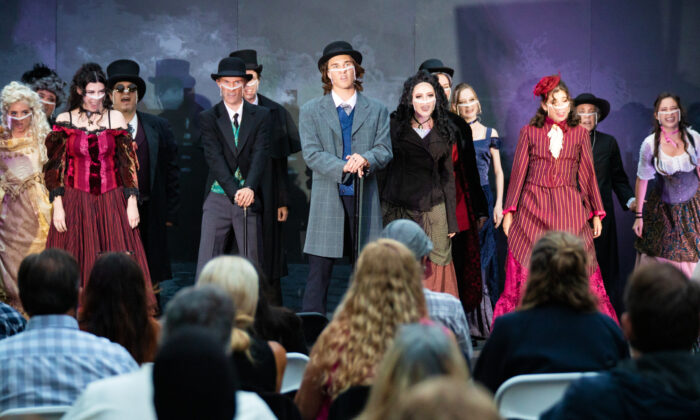 COSTA MESA, Calif.—Like most other summer events scheduled across Orange County, California, the Braver Players Theater Company was on the verge of canceling its latest show, a musical version of “Jekyll & Hyde.”

A theater group for children and teens based in Costa Mesa, Braver Players had been rehearsing for weeks when the COVID-19 pandemic hit and the Attic Community Theater in Santa Ana, where they planned to stage the show, shut down indefinitely.

That’s when Chelsea Braverman, founder and president of Braver Players, decided to “think outside the box.” That’s her specialty, she says.

“I cannot let my kids down,” she told The Epoch Times. “If we can do this and take every single safety precaution, then this opens up a way to be able to do this for the next year if we can.”

Braverman, 44, began reimagining every aspect of the production in order to make it work—but she couldn’t do it alone. Performers, family members, and volunteers all chipped in, and in the true spirit of the theater, their combined efforts created a uniquely special show.

The first thing the group needed was a new stage—a performance space that provided social distancing for actors and audience. Braverman contemplated and came up with a safe solution: do the show outside. But they still needed a stage.

She asked the landlord of her company’s studio for permission to use the building’s parking lot. The willing landlord approved—but since the parking lot was used during the day, the stage had to be taken apart each night.

The next step was transferring the stage to an outdoor setting, a task enthusiastically tackled by “two rock star dads” of performers in the show, according to Braverman.

The eager parents, Mike Anderson and Matthew Daniels, are known among the cast and crew as the “men in black” because they like to wear stagehand-style all-black clothing. They have helped build sets for Braver Players in the past—but designing a set for the outdoors presented unique challenges.

“Normally, when Chelsea does a show … you have a budget,” Daniels, a resident of Buena Park, told The Epoch Times. The allotted money pays for sets and theater rental, he said. But this time, that wasn’t the case.

“Well, a number of events happened [and] those things went away. So Mike and I [asked], ‘Okay, what do we have in stock?’” he said.

The two men pulled from existing “wagons,” rolling platforms made of plywood and two-by-fours, to erect a stage that could be broken down nightly and reassembled outdoors. Then, since the outside space they were using was a sloped driveway behind the company’s location, they had to level the stage.

Generous contributions of time and money from other parents and community members were also essential in preparing the production.

“We do it for the kids,” Anderson, a Cypress resident, told The Epoch Times.

Changing the venue to an outside space was only the first major challenge. Every aspect of the production had to be reassessed in order to make it “super COVID friendly,” Braverman said.

Keeping the cast of 21 kids safe was her biggest priority. That meant social distancing, which required the choreography and blocking to change.

“How do you look like you’re in love 6 feet apart? How do you murder somebody and not touch them?” she said. “How [do the actors] get that emotion across without being close to that person?”

The talented performers, many of whom attend the Orange County School of the Arts in Santa Ana, adapted quickly and embraced the changes.

“Surprisingly, they love it because it’s brought a fresh new energy into the way that we’re used to performing,” Braverman said.

Safety protocols were installed backstage to protect the participants. “We’ve even gone to the extremes … every actor has their own prop and their own prop box. So nobody’s touching anybody else’s stuff,” she said.

After months of adjusting to the new situation and rehearsing under the altered conditions—the show was originally set for April—the company was finally ready for the next step: an audience.

The unpredictability of the wind and noise caused by flying aircraft—the company is located near John Wayne Airport—created additional challenges that separated this theatrical event from past productions.

“As long as the wind doesn’t change directions, I think we’ll be fine,” Anderson said. “If the winds come up, we’re in trouble.”

Minutes before the show began on opening night, a plane flew overhead. “And that will be an issue, too,” he said.

Maintaining social distancing and wearing masks are requirements for the 50 or so audience members as well.

Before entering the seating area, attendees are asked to sign a COVID-19 liability form. The chairs are strategically placed to keep those who didn’t arrive together 6 feet apart.

After the crowd settled, the cast entered, wearing elaborate costumes and donning clear face masks throughout the duration of the performance.

“For the first few minutes of the show, you notice them, kind of like when you’re going to a foreign film and you’re reading subtitles. But then after 10 minutes, you don’t even notice them anymore, and you’re able to see all the actors’ facial expressions,” Braverman said.

Fortunately, the winds remained mild and temperate during the play’s Aug. 5 opening. When overhead noises swelled, the game cast of talented teenagers stayed in character and remained committed to their performances.

“It’s very inspiring. I’m inspired by how all the parents and all the kids really stepped up and made it work,” Braverman said.

Social distancing is ingrained as part of the backstage protocol as well. During intermission, one cast member jokingly informed her father that she would have to take an Uber ride after the show so she didn’t share such a close space with him on the way home.

“I love you too, sweetheart,” her father wryly replied.

By the time the cast members assembled onstage to take their curtain calls, the lucky crowd had been treated to a unique production of “Jekyll & Hyde”—but the special nature of the production went far beyond the performance.

“The lesson that these teens are now seeing [is] you start something and you finish it, even under the harshest of circumstances. You do whatever you can do to push through. We’re a teaching theater company, so I [think] it’s a really good lesson for them,” Braverman said.

Daniels said, “For these kids, sometimes theater is their one extracurricular activity. The old saying goes, ‘the show must go on’ … that idea—that the show’s bigger than the individual, and it must go on—is a great lesson for kids to see.”

Braverman says the company now plans to continue to do more outdoor shows, especially in the summer. Upcoming productions include a version of “Legally Blonde” for teens and “Beauty and the Beast Junior” for tweens.

The Braver Players production of “Jekyll & Hyde: The Musical” runs through Aug. 9, with matinees on Saturday and Sunday.