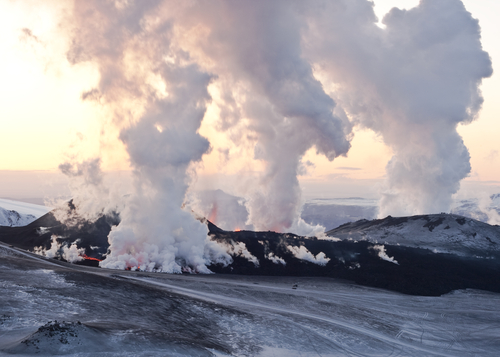 A file photo of a volcano in Iceland. (Shutterstock*)
Environment

Your Car Could Run on Volcano Power

Vulcanol is produced about 30 miles outside of Reykjavik, Iceland—it is a type of liquid fuel made with the help of a volcano.

A local geothermal plant has long used the volcano’s heat to produce electricity. Carbon Recycling International (CRI) captures the CO2 emitted by the plant and turns it into renewable methanol, or “vulcanol,” as the company calls it.

It can be mixed with gasoline, so it works with regular vehicle systems. CRI began shipping to Dutch fuel distributor Argos in February. Argos operates a distribution network in the Netherlands, Belgium, France, Germany, and Switzerland.

About 20 million tons of methanol are used around the world annually, according to CRI, but most of it comes from non-renewable resources. Methanol runs cleaner than gasoline, with fewer harmful byproducts emitted.

KC Tran, CEO and co-founder of CRI, told Fast Company that volcanol can also be used for fuel cells in electric cars.

According to a CRI press release, CRI is the only company in the world operating a plant to produce liquid automotive transportation fuel from non-biological sources of renewable energy.

*Image of a volcano in Iceland via Shutterstock