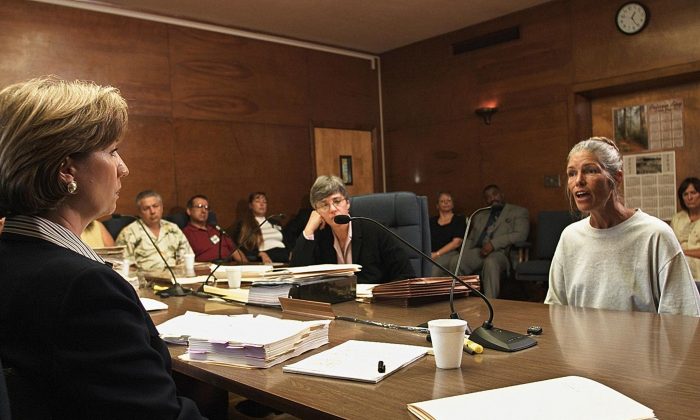 Sheron Lawin (L), a member of the Board of Prison Terms commissioners, listens to Leslie Van Houten (R), after her parole was denied 28 June 2002 at the California Institution for Women in Corona, California. Van Houten, 53, has served over 30 years in prison for her involvement in the Tate-LaBianca killings. Van Houten's attorney Christie Webb is at center. (Damian Dovarganes/AFP/Getty Images)
Crime and Incidents

LOS ANGELES—The California parole board recommended on Jan. 30 that Leslie Van Houten, the youngest of Charles Manson’s murderous “family” of followers, be released early from the life prison term she is serving for her role in the cult’s 1969 killing spree.

The ultimate decision on whether to grant parole to Van Houten, who was 19 at the time of the slayings and is now 69, rests with California Governor Gavin Newsom, whose predecessor, fellow Democrat Jerry Brown, twice denied the board’s recommendation that she be set free.

Manson, who died in prison in 2017 at age 83, directed his mostly young and female devotees to murder seven people, including actress Sharon Tate, in August 1969 in what prosecutors said was part of a plan to incite a race war.

Although Manson, one of the 20th century’s most notorious criminals, did not personally kill any of the seven victims, he was found guilty of ordering their murders.

He was also convicted later of ordering the killings of two others during that summer – music teacher Gary Hinman and stuntman Donald “Shorty” Shea.

The Jan. 30 decision by the parole board capped the latest of 22 attempts by Van Houten to persuade the panel that she be deemed suitable for release. She is currently being held at the California Institute for Women in Corona.

In a statement, the parole board said its latest ruling begins an evaluation process of up to 150 days during which the agency’s staff will “review all the facts and matters of law related to the decision.”

“If the grant withstands scrutiny, it will then be sent to the governor’s desk,” the board said. The governor can uphold, reverse or modify the recommendation, or send it back to the board for further review.

He may also opt to take no action, in which case the grant moves forward.

Van Houten was convicted of fatally stabbing grocery owner Leno LaBianca and his wife, Rosemary, in their Los Angeles home on Aug. 10, 1969. The words “Death to Pigs,” and “Healter Skelter”—a misspelled reference to a Beatles song—were found scrawled in the victims’ blood on the walls and refrigerator.

The previous night, members of Manson’s cult broke into the rented Los Angeles hillside home Tate shared with her husband, filmmaker Roman Polanski. Polanski was away in Europe at the time.

But Tate, who was 26 and eight months pregnant, was slain along with four friends of the celebrity couple, including coffee heiress Abigail Folger and hairstylist Jay Sebring.

Van Houten’s 1971 conviction and death sentence were initially overturned on appeal, but she was retried, convicted, and sentenced to prison in 1978.

Earlier this month, local media reported that the board had recommended for parole another Manson follower—Robert Beausoleil, 71, who has served nearly half a century for the Hinman killing. Newsom has not revealed his decision in that case.