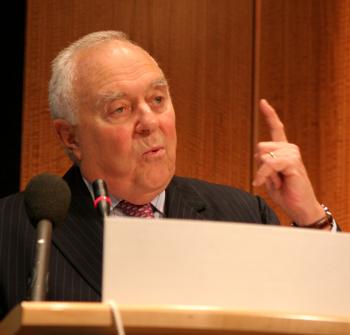 Gary Feuerberg
View profile
Follow
biggersmaller
Print
WASHINGTON—Every year for the past 15 years, The National Center on Addiction and Substance Abuse (CASA) at Columbia University has surveyed thousands of American teens and some of their parents to learn about attitudes and factors that influence drug abuse among teens. This year, the 15th annual survey reports a particularly disturbing trend for younger teens in middle schools.

"The percent of children in drug-infested middle schools—usually kids 12 to 13 years old (and younger)—has increased from 23 percent last year to 32 percent this year, a jump of 39 percent," says the report.

The definition used in the survey for drug-infested schools is that "drugs are used, kept, or sold on school grounds."

These 12- and 13-year-olds are roughly 33 times more likely to have tried tobacco and nearly three times more likely to have tried alcohol when they say they attend a drug-infested school compared to a drug-free school. No 12- or 13-year-olds in drug-free schools in this survey had tried marijuana, compared to 10 percent in drug-infested schools.

The implication of the findings is that children placed in an environment where illicit drugs are common will more easily succumb to them and become addicted, an outcome that Joseph A. Califano Jr., CASA founder and chairman, wants very much to prevent.

"A child who gets through age 21 without smoking, using illegal drugs, or abusing alcohol is virtually certain never to do so," says Califano. But the odds of finding such youth are becoming increasingly less. He spoke at the Kaiser Foundation Building, Aug. 19, when the report was released.

Prior to his substance abuse work, Mr. Califano had a distinguished government career in the Johnson administration and later as Secretary of Health, Education, and Welfare during the Carter administration. He is the author of 12 books, the latest of which is, "How to Raise a Drug-Free Kid—The Straight Dope for Parents" (2009), based on nearly two decades of CASA research.

Now 79, Mr. Califano has become a crusader to rid our public schools of drug infestation, which has been steadily increasing since he founded CASA in 1992.

In some teen focus groups, teens and parents often brought up the matter of gangs. Consequently, for the first time, CASA explored the role of gangs in facilitating illicit drug use.

It is clear from the CASA data that gangs are associated with drug abuse. Nearly 6 out of 10 schools (58 percent) with gangs are drug-infested, compared with three out of 10 (30 percent) schools without gangs.

Forcing young teens and pre-teens to attend drug- and gang-infested middle schools, Califano likened to "state-sanctioned child abuse," because the earlier a child begins to smoke, drink, or use drugs, the more likely that child will become "addicted and ruined for life," Califano said at the news conference.

Nearly half (46 percent) of teens from public schools report that gangs are at their schools compared to only 2 percent of teens at private and religious schools. Even though the focus of CASA surveys is on drug abuse of teens, this difference in gang-infested schools is itself a remarkable finding.

Differing perceptions of drugs by teens in private and public schools is yet another disturbing trend in the survey. In 2001, CASA found 62 percent of public school students and 79 percent of private and religious school students said they attended drug-free schools. In this year's survey the percents are 43 and 78, respectively. Hence, the difference in drug-free schools widened from 17 to 35 points.

The data used in the CASA annual survey is derived from two surveys. First, a telephone survey of 1,000 teenagers, 12-17, was employed similar to previous CASA surveys. This survey was used to measure trends based on past surveys, and has a sampling error of plus or minus 3.1 points.

However, there was concern that cell phone only households may be missed in a telephone survey and bias the results. Thus, two Internet-based surveys supplemented the telephone survey, consisting of a survey of 1,055 teenagers and 456 parents of the teens, using addressed-based sampling.

It should be noted that the results in the CASA report are probably understated, according to Califano for two reasons: (1) teens are less likely to report proscribed behavior of illegal drug use, and (2) parents had to consent to their children participating, which likely excluded the worst cases.

The fact that teens were aware of their parent's consent may also have inhibited them from full disclosure of their drug activities, especially if the teens lacked full privacy during the telephone interview.