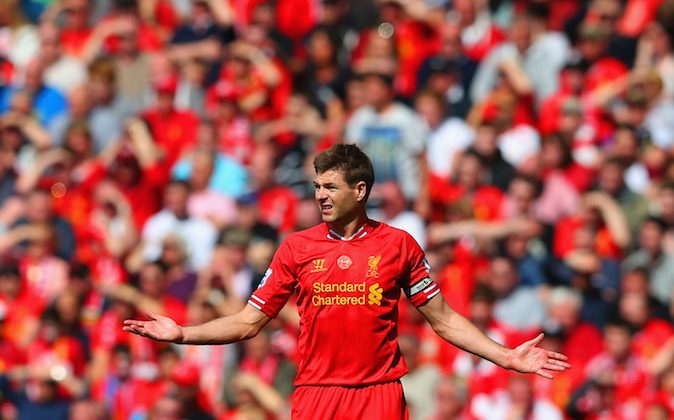 Steven Gerrard of Liverpool looks on during the Barclays Premier League match between Liverpool and Chelsea at Anfield on April 27, 2014 in Liverpool, England. (Photo by Clive Brunskill/Getty Images)
Soccer

‘Young Steven Gerrard at the Back’ Video: Liverpool Captain Trolled on Twitter After a Young Boy Slips Up at Commonwealth Games

A young boy running beside some Commonwealth Game distance runners slipped and fell on the pavement.

The video of the incident was put up on Vine, and shortly, “Young Steven Gerrard” started trending on Twitter.

Gerrard, who retired recently from international football, slipped during a crucial match against Chelsea in the 2013/2014 season.

Liverpool ended up losing to Chelsea 2-0, and lost the title to Manchester City.

LONDON (AP) — England captain Steven Gerrard announced his retirement from the national team Monday to focus on playing for Liverpool.

The 34-year-old midfielder made 114 appearances for England over 14 years.

Gerrard said he “agonized” over his future after the World Cup in Brazil, where England went out in the first round.

He told the Football Association that “this has been a very difficult decision, one of the toughest I’ve had to make in my career.”

Gerrard’s career with the Three Lions began with a 2-0 win against Ukraine in 2000.

He is third all-time in appearances for England behind goalkeeper Peter Shilton (125) and David Beckham (115). Gerrard was captain for 38 international games and scored 21 goals, including three in his 12 World Cup appearances.

“I have enjoyed every minute of representing my country and it is a sad day for me knowing that I won’t pull on the England shirt again,” Gerrard said. “To ensure I can keep playing to a high level and giving everything to Liverpool Football Club I believe this is the right decision.”

England manager Roy Hodgson was disappointed with the decision but said he understood it.

“I must respect his wishes due to the discussions we have had and the amount of thought and consideration he himself has given it,” Hodgson said. “We shall miss his leadership qualities as we look ahead to the (Euro 2016) qualification campaign with a youthful group of players.”