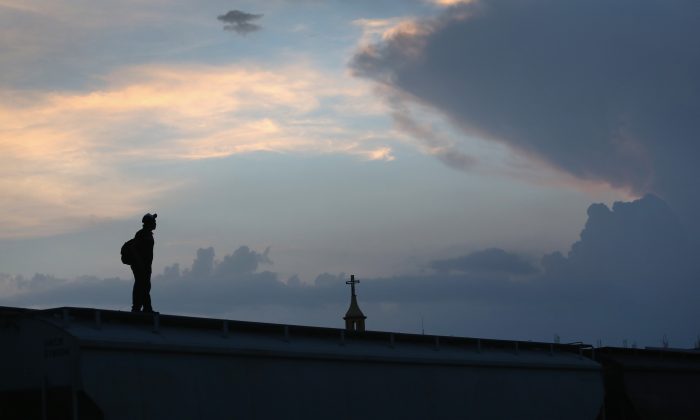 NEW YORK—For unaccompanied minors like Juan, time is their currency. The machete that he carried for his agriculture job bought him time from the gangs, time to live and save for an escape.

Getting the timing right when running and jumping from one rusty freight train to the next determined how many more days he would starve; if he missed a train, he waited 24 hours for the next.

Panic-stricken, he ran almost blindly, relying on directions from strangers to get from one train to another. Juan, 17, (who declined to give his last name because his legal status has not been resolved) missed three trains during his one-month trek from Honduras to the U.S.-Mexico border. People threw food at the trains. He ate every other day, if he was lucky.

He traveled on “the beast,” also known as the “el tren de la muerte,” the death train. It’s a network of Mexican freight trains that migrants from Central America illegally climb on top of to ride to the United States.

There were moments of beauty during those rides. Sitting atop a train at dusk, with nothing in the distance except an endless, purple sky. But any thoughts of hope and opportunity were soon outweighed by fears of the unknown.

Would he make it to the United States in one piece, or would he lose a limb during one of the train transfers?

Drug cartels often piled dead trees on tracks to stop the train and kidnap its clinging migrants for ransom. Would this train be one of them?

Would a border patrol catch him? One did, in San Antonio, after Juan walked for two weeks without food.

For two months, Juan stayed in a detention center: a house, where 30 people lived in four rooms.

In February, the authorities verified Juan’s relatives in New York City. Juan’s uncle, a man who made a similar trek himself many a year ago, paid for Juan’s plane ticket to New York. When Juan arrived at LaGuardia Airport, he cried.

It was the long awaited union of a family of Honduran immigrants, but they are migrants who fall under two very different immigration categories.

“Back then, it was easier,” said Julio (who declined to give his last name to protect Juan’s identity), a relative of Juan’s who had crossed the border with his mother, brother, and two cousins in 1989. “There wasn’t a big problem with gangs. We only wanted a better economic situation.”

Juan is one of at least 63,000 unaccompanied young migrants who have arrived since October 2013, according to U.S. Customs and Border Control.

Their arrivals, which have doubled over the previous year, are a humanitarian crisis that has engrossed the nation. But, for immigration advocates who were just closing in on the ever-elusive federal package of comprehensive immigration reform, migrants like Juan could not have arrived at a worse time.

A comprehensive immigration bill, which included corporate visa reform and a path to citizenship for 11 million immigrants, who had entered the United States illegally, had passed in the Senate (68-32) in 2013.

The expectation for the bill to pass in the House was high. It was what President Barack Obama had promised during his campaign.

“I will make it my top priority in my first year as president,” Obama had said in 2008.

“I cannot guarantee that it is going to be in the first 100 days,” Obama told Univision journalist Jorge Ramos in 2008. “But what I can guarantee is that we will have in the first year an immigration bill.”

The 2013 Senate immigration bill—the Border Security, Economic Opportunity, and Immigration Modernization Act—had been the product of a bipartisan cooperation.

“Most important, the bill was bipartisan,” said Daniel Coates, an organizer for immigration advocacy group Make the Road NY. “It shows there is a bipartisan consensus out there that can be reached.”

The bill has not moved forward in the House due to a number of political reasons. And as the border crisis thickens, it may be the last bipartisan immigration consensus for some time.

“I can’t foresee Congress getting it together … before the presidential election,” said Neena Dutta, chapter chair of the American Immigration Lawyers Association of New York. “Nothing is impossible. But from a practical, political standpoint, it’s unlikely in 2014.”

The focal point in June was still on citizenship for the 11 million already in the United States; in July, the focus shifted to assisting the unaccompanied minors, according to Coates.

“These are two very different issues,” Coates said. “We’re talking about people who have been here for a long time, and those who just arrived at the border.”

“You hear the actual stories of pre-teen kids being sexually attacked … of a woman who witnessed her sister being shot while breast feeding her child,” Dutta said. “It’s not a choice for these people.”

There is some hope that Obama may use his executive action to protect immigrants without legal permission to be in the United States from deportation.

One of the options on the table for executive action is to expand the Deferred Action for Childhood Arrivals (DACA) program to cover more than children.

DACA currently allows immigrants brought over as children to stay without fear of deportation, and receive work permits.

For unaccompanied minors like Juan, their situations are changing at a rapid pace.

The House passed legislation to end DACA earlier this month, as many said the program motivates the thousands of unaccompanied minors to make the dangerous journey.

The bill would also accelerate deportations of unaccompanied minors from Central America by mending a 2008 trafficking law.

The bill is unlikely to pass in the Senate. But the U.S. Department of Justice recently expedited nearly 3,500 court cases for the unaccompanied minors in New York. The cases typically take years to proceed, but they have been pushed to the front of the immigration court docket.

There is a shortage of lawyers, though.

According to research from Syracuse University, 9 out of 10 children were deported if they did not have an attorney. As for the 52 percent who were represented by an attorney, 5 out of 10 were allowed to stay in the United States.

As a minor with a lawyer, there is a chance that Juan may not have to return to a life threatened by gang violence.

There is a look of unease in Juan’s large, droopy eyes, as he begins the ninth grade at a bilingual school in New York. His uncle and aunt locked his cellphone so that he would have minimal distraction from his studies.

But for his uncle, who crossed the border without legal documentation more than 10 years ago, it remains unclear if he will ever receive legal status.