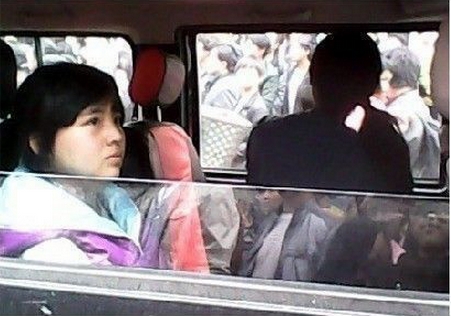 Netizens circulated a JPG file that included text describing the incident and photos from the scene.
China

Young Girl Cuffed and Paraded Through Streets by Official in China

The crime? Spilling water on a vehicle belonging to the local government
By Annie Wu

A 13-year-old girl was handcuffed and paraded through the street after accidentally spilling water onto a car belonging to the local government of Guizhou Province in China, according to posts being circulated on the Chinese microblogging platform, Sina Weibo.

On May 27, a post appeared on Weibo indicating that on April 6, a 13-year-old girl named Rao Yao was cuffed and made to march beside the official vehicle for 20 minutes, in Kele Township, Hezhang County, Guizhou. It is unclear why news about the incident only emerged online over a month later; netizens circulated a single, long JPG file that included text that had been rasterized, as well as photographs from the scene.

When the girl’s aunt protested the treatment, she was set upon by nearby police; more than 30 of them beat her to the ground, accounts said. A photograph shows the woman laying prostrate after the beating. Rao, the niece, was later detained at the local police station for 12 hours, according to the post.

When interviewed by reporters, the party secretary of the township, Yuan Zehong, responded that the police officers were not parading her, but merely bringing her to the police car. He also claimed that the young girl was handcuffed after her parents—both street vendors—got involved in a dispute with local police officers.

Soon after news of the treatment of the young girl was publicized, the local Party secretary’s name, Yuan Zehong, was the most frequently searched term on Sina Weibo, with over 34,000 related posts.

On Weibo, Chinese netizens expressed outrage at the incident. Author Cao Junshu posted on his account, “The township party secretary Yuan Zehong instructed the police station to arrest someone, and the police station immediately rushes to handcuff someone. The biggest problem in our society is right here! Once an official says a word, all will unconditionally execute [the orders], even if there’s no good reason, they will still arrest people. As long as there is no independent judicial system, nothing can be done.”

Many others on Weibo urged Yuan to step down from his official position. In defense, Yuan said that he did not know that the girl was a minor, because “she looked big.” This response was roundly ridiculed.

The Communist Party’s official news agency, Xinhua, reported on its website that Yuan and a local police officer have been suspended from duty until further investigation into the incident.

Official abuse of power is a growing source of frustration among people in China. City residents frequently face forceful and at times violent behavior from chengguan (“urban management”) officers, a parapolice agency in charge of enforcing city regulations. Netizens regularly document their tendency to assault, illegally detain, and forcefully confiscate property from residents and vendors. In 2012, Human Rights Watch also published a report on abuses committed by chengguan in China.