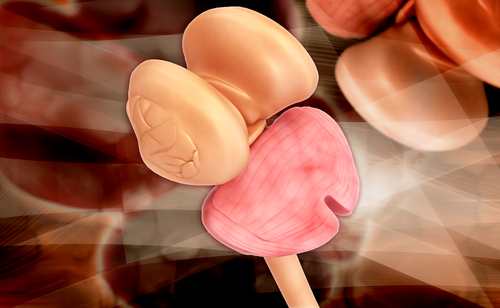 A rendering of a pineal gland. (Shutterstock*)
Beyond Science

You Have an Eye Inside Your Head: What’s it For?

Human beings all have what has been called a vestigial (unused) eye in their brains. This eye has a structure similar to our external eyes, with retinal tissues, and it is sensitive to light.

This eye, known as the pineal gland or pineal body, has been much-discussed in philosophy and medicine. Here’s a look at a few explanations of the role played by the eye in your brain—from its function as a “third eye” that can perceive things we cannot see with our external eyes to its role in producing melatonin and more.

The red section shows where the pineal body is located in the brain. (Shutterstock)

In the second century, prominent Greek physician Galen of Pergamum was the first to describe the pineal gland. He said, like other glands, its function was to support blood vessels.

He dismissed the prevalent thinking of his time, which he described: some thought the pineal body regulated the passage of psychic pneuma (a material thought to be the vehicle of sensation) the way an esophagus regulates the movement of food to the stomach.

2. Descartes Says it is the Seat of the Soul, Thought

Descartes saw it as the origin of thought. He said that it is the only part of the brain that is unique, not duplicated within the brain. He said it must, thus, be the place where all information is centralized—a place in which our consciousness can process information in a single location, and from which our consciousness can send out all messages to the rest of the brain and body.

“Since it is the only solid part in the whole brain which is single, it must necessarily be the seat of the common sense, i.e., of thought,” he wrote, according to the Stanford Encyclopedia of Philosophy.

His understanding of the precise location of the pineal body in the brain was wrong, but Descartes’s description of its uniquely singular nature was correct.

This view has been echoed by many spiritual disciplines.

In some Eastern philosophies, the pineal body aligns with the location of the crown chakra, a key point for high-level consciousness and enlightenment, or the understanding of higher realms.

Many have associated the pineal body with the third eye known to religions and spiritual practices for millennia.

In an autobiographical book written by Tibetan lama Lobsang Rampa in the 1950s, titled “The Third Eye,” Rampa describes how his third eye was surgically opened by practitioners of an esoteric Tibetan science.

The publishers write in the foreword to the book that they submitted the transcript to nearly twenty experts, and: “Their opinions were so contradictory that no positive result emerged. Some questioned the accuracy of one section, some of another; what was doubted by one expert was accepted unquestioningly by another.”

They write: “We may feel that  here and there he exceeds the bounds of Western credulity, though Western views on the subject here dealt with can hardly be decisive.”

The publishers continue: “Lobsang Rampa has provided documentary evidence that he holds medical degrees of the University of Chungking and in those documents he is described as a Lama of the Potala Monastery of Lhasa. The many personal conversations we have had with him have proved him to be a man of unusual powers and attainments.”

Rampa describes how a surgery was performed on the spot above the bridge of his nose where the passageway to the third eye, or pineal body, is held to be.

Thereafter he had special abilities of perception he did not have before.

In the 1950s, scientists discovered that the pineal body, thought to be vestigial, does have a perceivable function. It senses light and produces melatonin.

Melatonin is a substance that influences reproduction and the immune system and is also an anti-oxidant, meaning it can be effective in fighting cancer and reducing the effects of aging. The pineal body produces melatonin in a light environment and halts melatonin production in a dark environment.

Some have connected the pineal body’s function in this respect to the understanding of the pineal body as a control center in the brain. It processes external information and controls important rhythms in the body.

As with many parts of the human brain, definitive knowledge of the pineal body is lacking.