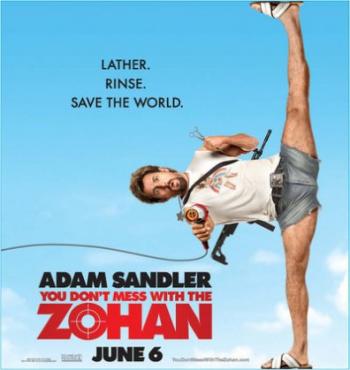 A Wild and Exaggerated Character in Borat-Manier (Sony Pictures)
Entertainment

You Don’t Mess With the Zohan

By Epoch Times Staff
Print
Zohan Dvir (Adam Sandler) is the top agent in Israel's secret service, the Mossad, and known nationwide as "Zohan." No one better mess with him, because any resistance is futile. His nemesis of long-standing, the Palestinian Terrorist Phantom (John Turturro) found that out for himself.

However, each must follow his own dream, and so it is with Zohan, who fakes his own death to finally move to New York and become a hair stylist! Done!

His second career flourishes and he also discovers his first great love in the persona of Dalia, the salon owner (Emanuelle Chriqui).

Though he is adamant in putting an end to his terrorist-fighting career, he soon discovers he cannot deny his past easily—as all his old or new detractors and enemies are discovering again: Better not to mess with Zohan!

A Man of a Thousand Abilities

"Of course Zohan can do it all—not only running, fighting gloriously, or swimming…he can simply do everything," according to the film's stunt director John Rogers. "Depending on the circumstances, we sought out the best talent for the specific situation. We engaged free runners who can jump from building to building. We had gymnasts portraying some of the scenes on the chair(s). We engaged professional dancers for the disco-scenes and swimmers for the sequences in the water; and those were only a handful of stunt performers. I have never seen one actor have that many doubles for his role. It is almost ridiculous, but also great fun."