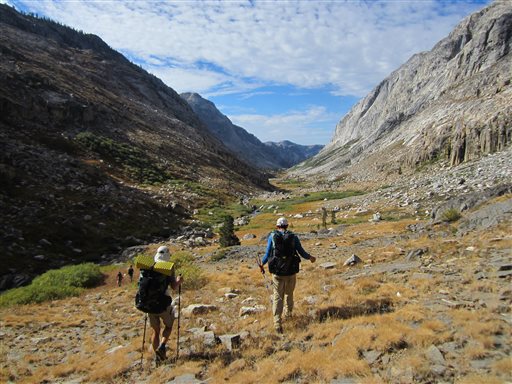 Hikers making their way through an area of Yosemite National Park that lacks trails in Stubblefield Canyon. Outdoor adventurer Andrew Skurka, pictured on the right, has hiked tens of thousands of miles alone in wild areas across the U.S., and now shares his knowledge by leading guided trips for others interested in backcountry hikes. (AP Photo/John Pain)
News

Yosemite National Park’s 123rd anniversary was celebrated by Google on its front-page Doodle feature, but the park is shut down starting Oct. 1.

The government shutdown that went into effect on the same day affects Yosemite and other national parks, including the Statue of Liberty.

It is unclear if Google is celebrating Yosemite in a deliberate jab at the federal government for failing to pass a spending bill.

House Republicans and Senate Democrats failed to come to an agreement that would fund the government past Sept. 30–enabling the first shutdown since 1995.

The Statue of Liberty, Ellis Island, Alcatraz Island in San Francisco, and Independence Hall in Philadelphia will close. The Washington Monument, National Zoo and the Smithsonian in D.C. will also be shut down.