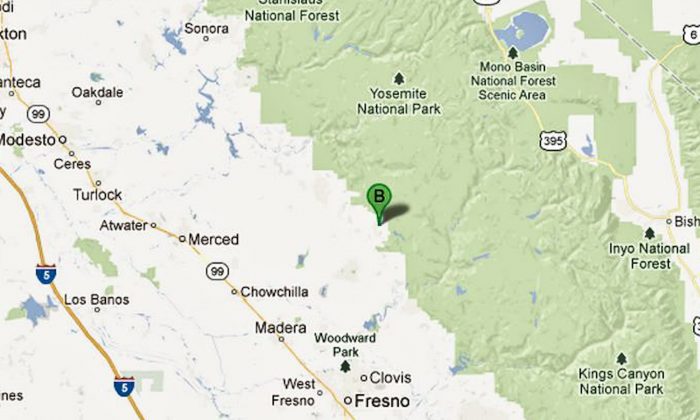 Yosemite bus crash: A Google Maps view of the approximate location of the tour bus crash about six miles south of Yosemite National Park on Highway 41. (Screenshot via The Epoch Times)
US

Yosemite bus crash: A tour bus on its way back from Yosemite National Park crashed, injuring all 16 passengers, most of whom were elderly.

Driving along the scenic stretch of Highway 41 south of Yosemite National Park in California, a tour bus carrying 16 passengers lost control and crashed.

“If the tree wasn’t there to stop the bus, it would have continued down the ravine,” Sgt. Edward Greene of the California Highway Patrol (CHP) told the Fresno Bee.

Speed may have been a factor in the accident, though it has not yet been determined how fast the driver, 49-year-old Changefeng Liu, was going. The bus was taken to an impound yard to be examined for mechanical failures.

Liu worked for Seven Happiness Tour & Charter for six years, said Charles Wu, a company employee who answered the phone at the company’s headquarters on Sunday. Wu did not comment extensively on the accident, but did say “Most of them [passengers] were Chinese people from the Bay Area.”

The company has nine drivers, six vehicles, and a clean accident record for the past two years, according to Federal Motor Carrier Safety Administration (FMCSA) records.

In February, FMCSA ordered the shutdown of another California-based tour bus company, Scapadas Magicas LLC, which also had a clear record for the two years preceding its February 3 accident that killed seven passengers and injured dozens.

Following that incident, U.S. Transportation Secretary Ray LaHood told PR Newswire: “Safety is our number one priority, and we will not tolerate unsafe bus companies on our nation’s roads … We will not allow safety to be compromised.”

On March 16, a tour bus carrying the Seton Hill University women’s lacrosse team crashed after veering off the Pennsylvania Turnpike, killing the driver and the pregnant head coach.

On March 21,  U.S. Sen. Sherrod Brown (D-OH) called on the government to implement his Motorcoach Enhanced Safety Act. The act became law in July 2012, but has not yet been fully implemented.

“In the past three months, crashes in Pennsylvania, California, Oregon, Maine, and Missouri reiterate the clear need to act promptly on these standards,” wrote Brown in a letter to LaHood posted on the Senator’s webpage. “That is why I request that you accelerate the rule-making timeline on these critical safety measures.”