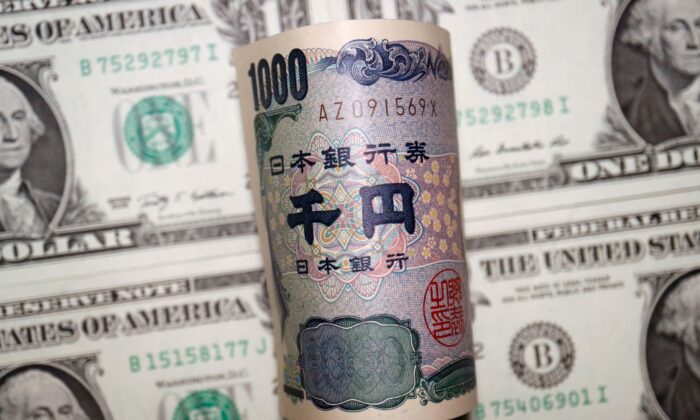 LONDON—Safe-haven demand briefly lifted the yen on Friday after former Japanese prime minister Shinzo Abe was shot while campaigning for a parliamentary election, while the dollar’s continued strength kept the euro hovering just above parity.

The single currency has hit successive 20-year low this week on signs the eurozone economy will tip into recession, but it rose off earlier session lows as markets adjusted some bets ahead of monthly U.S. jobs data.

Abe, Japan’s longest-serving leader, died on Friday after being shot as he spoke in the western city of Nara.

While Abe was renowned for his signature “Abenomics” policy featuring bold monetary easing and fiscal spending, analysts played down the impact of the shooting on markets.

“It’s a risk-off environment so the yen is performing better. It’s incredibly sad news but it seems like an isolated event and also we are talking about a former politician here,” said ING Bank strategist Francesco Pesole.

Focus stayed on the euro which is down around 3 percent against the dollar this week as investors worry about the economic impact of an energy crisis brought on by the uncertainty of gas supply from Russia.

“Chances of euro dollar hitting parity are non-negligible either today or in coming days,” said Pesole.

“The general dollar momentum remains strong and concerns about euro zone economic outlook is feeding into concerns the ECB can deliver as much tightening as markets are pricing.”

The European Central Bank is preparing to kick off rate hikes this month but will still lag the policy tightening pace of the Federal Reserve and most other central banks.

Sterling was set for a second consecutive weekly decline against the dollar, but its 0.9 percent fall this week is relatively modest amid political chaos that has seen Prime Minister Boris Johnson resign. The pound was down 0.3 percent on the day to $1.1989.

As energy prices take the wind out of confidence and growth in Europe, investors are growing concerned about the U.S. economy, even though recent data has beaten forecasts.

U.S. non-farm payrolls figures are the next indicator, due at 1230 GMT, with economists forecasting some 268,000 jobs added in June.

A stronger figure could allay recession worries, but would probably add to rate hike bets, further lifting the dollar.

Two of the Fed’s most vocal hawks on Thursday said they would support another 75 basis-point interest rate increase later this month but a downshift to a slower pace afterward.

By Joice Alves and Sujata Rao