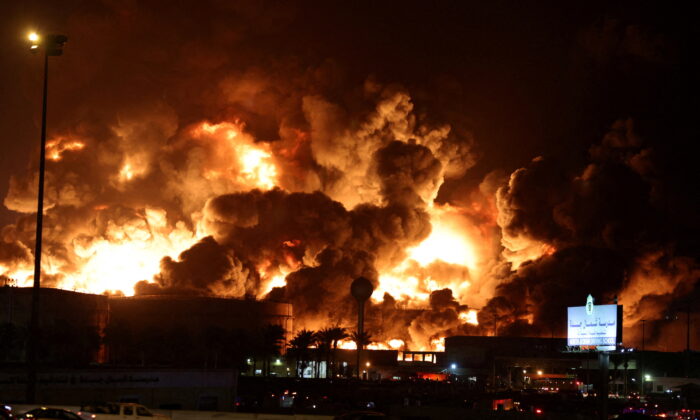 A fire at Saudi Aramco's petroleum storage facility, after an attack, in Jeddah, Saudi Arabia, on March 25, 2022.(Stringer/Reuters)
Middle East

RIYADH, Saudi Arabia—Yemen’s Houthi group said on March 26 that it would suspend missile and drone strikes on Saudi Arabia for three days, in a peace initiative it said could be a lasting commitment if the Saudi-led coalition fighting in Yemen stopped air strikes and lifted port restrictions.

The group also announced a three-day halt of ground offensive operations in Yemen, including in the gas-producing region of Marib, Mahdi al-Mashat, the head of the Houthis’ political office, said in a speech broadcast on television.

“This is a sincere invitation and practical steps to rebuild trust and take all the sides from the arena of talks to the arena of acts,” Mashat said.

The unilateral initiative came as the war between the Iran-aligned group and the Saudi-led coalition entered its eighth year, and violence has worsened over recent months. The conflict has killed tens of thousands of people, mostly civilians, and left millions facing starvation and disease.

The Saudi-led coalition pounded the Houthi-controlled seaports of Hodeidah and Salif with airstrikes on March 26, a day after the group launched broad attacks on Saudi Arabia, including on an oil facility in Jeddah, causing a huge fire that sent up a big plume of black smoke.

Crude prices rose more than 1 percent to more than $120 a barrel on March 25, following the Jeddah attacks.

Lifting restrictions imposed by the coalition’s warships on Yemen’s Red Sea ports has been a major Houthi condition for a ceasefire. Saudi Arabia says there is no blockade on the ports and that it’s only preventing arms smuggling.

The March 26 initiative would last if the coalition reopened the ports and stopped its airstrikes, Mashat said, adding that the group would extend the suspension of ground operations if Saudi Arabia announced a withdrawal of foreign troops from Yemen and stopped backing local militias.

It’s unlikely that the kingdom would agree to such conditions, as Riyadh seeks an inclusive ceasefire simultaneously with reopening the ports and Sanaa airport.

The Saudi-led coalition offered a unilateral ceasefire last year. The Houthis rejected the offer, saying the humanitarian situation and reopening of the ports needed to be addressed before any peace talks.

Mashat said the group was ready to release all prisoners, including the brother of Yemen’s president, Abd-Rabbu Mansour Hadi.

The United Nations is also trying to secure a temporary truce for the Muslim month of Ramadan that starts in April, and ahead of Riyadh’s hosting of Yemeni parties for consultations later this month.

The conflict is widely seen as a proxy war between Saudi Arabia and Iran, but the Houthis say they are fighting a corrupt system and foreign aggression.