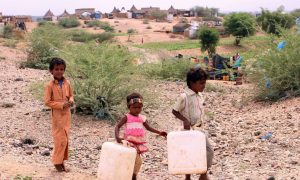 Yemen: A Country in Most Need of Help
0
Share Now
FacebookTweetParlerEmail
Copy Link 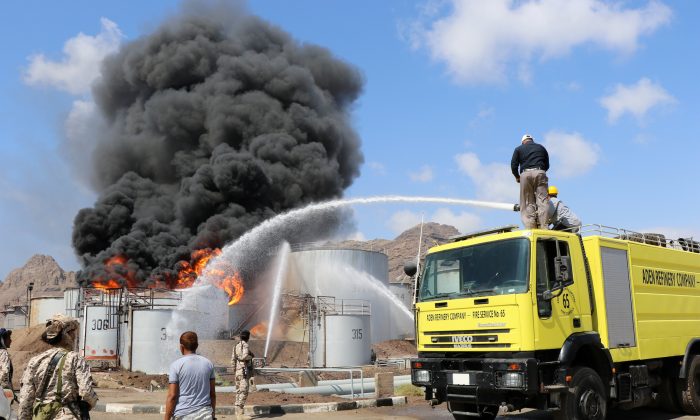 Firefighters try to cool down oil storage tanks adjacent to a tank engulfed by fire at the Aden oil refinery in Aden, Yemen, on Jan. 12, 2019. (Reuters/Fawaz Salman)
Middle East

ADEN—A fire at a refinery in Yemen’s southern port city of Aden spread to a second storage tank on Jan. 12, injuring six people, sources at the refinery said.

Sources told Reuters that civil defense forces had failed to contain the fire sparked by an explosion on Friday. The cause of the blast is still unknown.

Aden is under the control of the internationally recognized government, which is backed by a Saudi-led and Western-backed coalition. That alliance is battling the Iranian-aligned Houthi movement that seized the capital Sanaa in 2014.

The United Nations launched peace talks last month to try to end the nearly four-year-old war that has killed tens of thousands of people, devastated the economy, and left millions facing severe hunger. But since then, tensions have resurged.

A Houthi drone attack on Thursday on a government military parade in Lahaj, a province next to Aden, killed several people. Saudi state television said on Friday the coalition destroyed a base used by Houthis to direct their unmanned aircraft.

The Houthis deny receiving help from Tehran and say they are fighting against corruption. The conflict is widely seen in the region as a proxy war between Sunni Muslim Saudi Arabia and Shi’ite Muslim Iran.