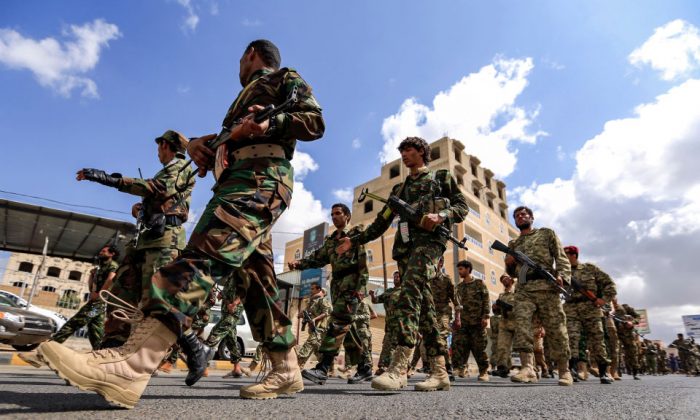 Yemeni Soldiers loyal to the Shiite Huthi rebels march in the capital Sanaa on Oct. 16, 2018 to show support against the Saudi-led intervention in the country. (Mohammed Huwais/AFP/Getty Images)
Middle East

SANAA, Yemen—A ceasefire agreed between Yemen’s warring parties in Hodeidah will begin on Dec. 18, sources from both sides and the United Nations said on Dec. 16, to try to avert more bloodshed in a port city vital for food and aid supplies.

The Iranian-aligned Houthi group and the Saudi-backed government of Abd-Rabbu Mansour Hadi agreed on Dec. 13 after a week of U.N.-sponsored peace talks in Sweden to cease fighting in the Red Sea city and withdraw forces.

The Houthis control most towns and cities, including Hodeidah and the capital Sanaa, from where they ousted Hadi’s government in 2014 prompting a Saudi-led coalition to intervene. The government is now based in the southern port of Aden.

Residents have reported continued skirmishes, mostly at night, on the outskirts of Hodeidah, where thousands of coalition-backed Yemeni troops have massed.

Yahya Sarea, a senior official of the Houthi armed forces, told reporters in Sanaa the ceasefire was set to start on Dec. 18.

“We hope they will be true to their words, otherwise we are ready to respond,” he added.

A source in the Saudi-backed government confirmed the date and said it was officially communicated to both parties in a letter from special Yemen envoy Martin Griffiths.

“While the Hodeidah agreement states an immediate start of the ceasefire, it is normal that it takes 48-72 hours to be communicated at the operational level,” a U.N. source said. “We expect the ceasefire to be implemented starting Dec. 18.”

The United Nations is trying to avert a full-scale assault on the port, the entry point for most of Yemen’s commercial goods and crucial aid supplies. It is a lifeline for millions of Yemenis facing starvation.

The agreement, the first significant breakthrough in peace efforts in five years, was part of confidence-building measures discussed at peace talks that aim to pave the way for a wider truce and a framework for political negotiations.

Under the deal, international monitors would be deployed in Hodeidah and all armed forces would pull back completely within 21 days of the start of the ceasefire.

A U.N.-chaired Redeployment Coordination Committee including both sides would oversee implementation. The committee is expected to start its work this week, the U.N. source said.

Griffiths has asked the Security Council to pass a resolution backing deployment of a robust monitoring regime to oversee compliance with the truce, headed by retired Dutch Major General Patrick Cammaert.

The combatants are due to hold another round of talks in January to agree on the political framework for negotiations to end the war that has killed tens of thousands of people and spawned an urgent humanitarian crisis.