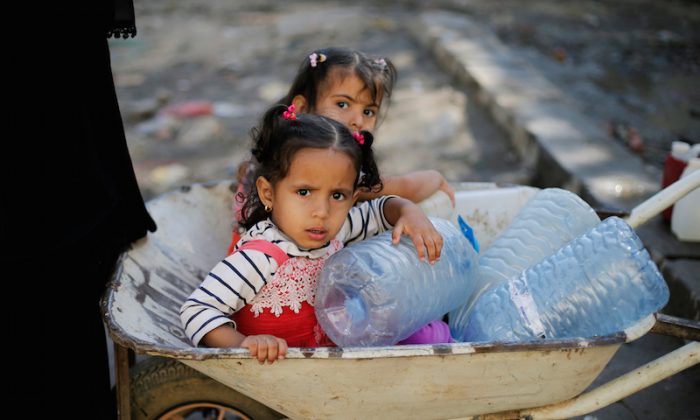 Girls wait next to a charity tap where people collect drinking water amid fears of a new cholera outbreak in Sanaa, Yemen on Nov. 5, 2018. (Khaled Abdullah/Reuters)
Middle East

SANAA—Authorities in the Houthi-held Yemeni capital Sanaa are sterilizing water supplies at wells, distribution networks and houses to help stem the world’s worst outbreak of cholera.

Nearly four years of war have crippled healthcare and sanitation systems in Yemen, where some 1.2 million suspected cholera cases have been reported since 2017, with 2,515 deaths.

The World Health Organization (WHO) warned in October that the outbreak is accelerating again with roughly 10,000 suspected cases now reported per week, double the average rate for the first eight months of 2018.

Most cases have been reported in areas held by the Houthi movement, which controls most population centers after ousting the internationally recognized government from Sanaa in 2014.

“We receive information of reported cases of cholera from the Ministry of Health, then the team sterilizes the house and 20 houses around it,” Nabeel Abdullah al-Wazeer, the Houthis’ minister of water, told Reuters in Sanaa.

“We worked from house to house and on sterilizing water wells. We also worked on bus-mounted tanks, which transport water in the private sector to the citizens, as well as sterilizing local institutions which distribute water.”

Cholera, which is spread by consuming contaminated food or water, is a diarrheal disease and can kill within hours. While previous outbreaks may have helped build immunity in the population, other diseases and widespread malnutrition can weaken resilience.

The United Nations says about 14 million people, or half of Yemen’s population, could soon face famine. Some 1.8 million children are malnourished, according to UNICEF.

Pediatrician Mohammed Abdulmughni administers intravenous fluids to children in WHO tents in Sanaa. Their beds rest on gravel and flies circle their faces.

“With winter’s arrival we expected the numbers would decrease, yet the cases have been coming in at the same pace,” he said. “We expected positive (diagnoses) cases to decrease but the cases remain high.”

More than 250,000 cases of cholera have been recorded in Yemen since the beginning of 2018, with 358 associated deaths, UNICEF representative Meritxell Relano told Reuters.

“We have prevented an outbreak at the scale of 2017,” Relano said. “But the risk is still there.”