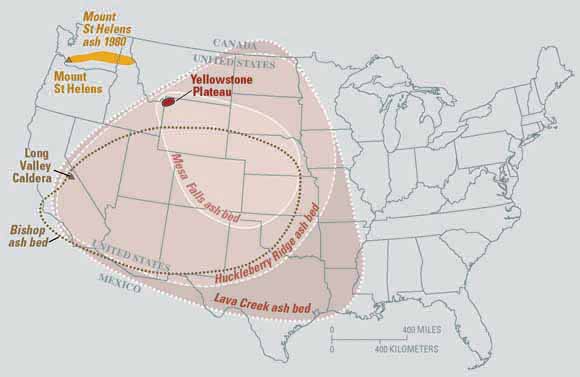 This map from the U.S. Geological Service shows the range of the volcanic ash that was deposited after the biggest of the Yellowstone National Park eruptions around 2.1 million years ago. "These eruptions left behind huge volcanic depressions called 'calderas' and spread volcanic ash over large parts of North America," it said. "If another large caldera-forming eruption were to occur at Yellowstone, its effects would be worldwide. Thick ash deposits would bury vast areas of the United States, and injection of huge volumes of volcanic gases into the atmosphere could drastically affect global climate. Fortunately, the Yellowstone volcanic system shows no signs that it is headed toward such an eruption in the near future. In fact, the probability of any such event occurring at Yellowstone within the next few thousand years is exceedingly low."
US

A new round of conspiracy theories has emerged from the blogging community regarding a potential Yellowstone supervolcano eruption.

The bloggers are continuing the thread that started after a 4.8 magnitude earthquake hit in the region on March 30.

U.S. Geological Service officials sought to assure the public that the earthquake didn’t spell an imminent eruption of the huge caldera underneath the park, and also said that videos circulating of animals possibly exiting the park are normal and don’t signal some type of “alert.”

However, some bloggers have developed new theories about the park, the volcano, and the surrounding area.

One popularized by the infamous website Before It’s News–where people can literally post anything they want–links to several videos, including one that purportedly includes a local radio broadcast advertising an evacuation near Yellowstone.

Blogger Camrens Maycee said that the report referenced fissures opening up and causing damage in Jackson Hole, Wyoming–a town in the middle of the park.

The town has been dealing with severe landslide issues as of the beginning of April, destroying at least one home and threatening others.

The video has also been promoted on conspiracy blogs such as secrets of the fed.

However, officials say that the landslide and subsequent evacuation was caused by more localized underground movement and therefore isn’t indicative of the caldera as a whole.

Another referenced story linked to a USA Today story about how the small town of Opal was evacuated after a fire and explosion at a nearby gas-processing plant. Opal is about 150 miles south of Yellowstone.

The evacuation reports are also linked to blogger Tom Lupshu’s assertion earlier this year, based off an email he claims comes from a trusted source, that the U.S. Geological Service is hiding data about the earthquake activity in Yellowstone.

“Washington is aware of this because they are the ones giving direction about this blackout,” the source said, linking the alleged hiding from other conspiracy theories such as FEMA coffins, nuclear missiles moving out of Texas, and Comet ISON impacting Earth.

“They are preparing for millions of refugees,” the source said, Lupshu reported in the February 19 video.

A separate blogger on YouTube said recently that he’s been keeping tack of seismological activity in the Yellowstone region and that it has been ramping up.

It should be noted that most if not all of these types of sources have any official information and often rely on other bloggers and conspiracy theorist types.

Official sources are divided over whether an eruption at Yellowstone can happen in the near future.

Most researchers agree that the Yellowstone supervolcano will erupt again, including Ilya Bindeman, an associate professor of geological sciences at the University of Oregon.

“Yellowstone is one of the biggest supervolcanos in the world,” he said in an analysis released by the university. “Sometimes it erupts quietly with lava flow, but once or twice every million years, it erupts very violently, forming large calderas,” which are very large craters measuring tens of kilometers in diameter.

Hot springs are evidence of the gigantic supervolcano beneath Yellowstone National Park. (NPS)

If a huge eruption happened again, similar to three big ones over the last two million years, he says that the eruption would obliterate the surroundings within a radius of over 100 miles and cover the rest of the United States and Canada with multiple inches of ash. A volcanic event of such magnitude “hasn’t happened in modern civilization,” he says.

However, Bindeman, like many scientists, say that the volcano eruption likely won’t happen soon.

Others such as Bob Smith of the University of Utah point out that at this time there’s no true way of knowing when the next eruption will be.

Smith is part of the team that recently discovered that the supervolcano is about 2.5 times bigger than previously thought.

In any case, the U.S. Geological Service says that it and partners such as the University of Utah are monitoring the situation and will be able to provide warning if there is an imminent eruption. Then again, that promise is one that the bloggers question.

All parties admit that nothing can be done to prevent an eruption.