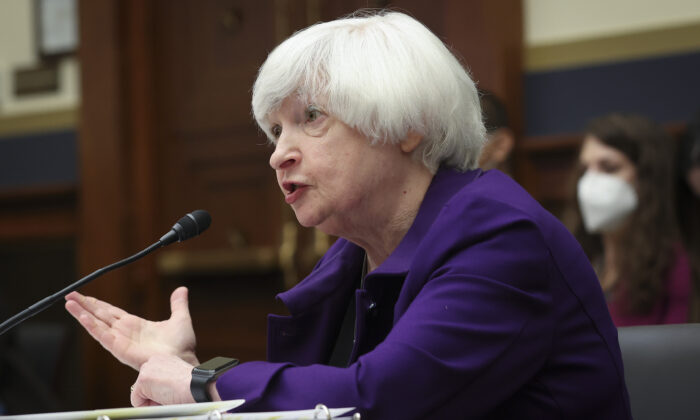 U.S. Treasury Secretary Janet Yellen is hosting a summit in Washington next week to address the effect of rising food costs.

The meetings, scheduled for the week of April 18, will include financial leaders from around the world, with representatives from the leading industrial nations of the G-7 and G-20, as well as heads of institutions such as the International Monetary Fund and the World Bank.

Yellen says the goal is to help the 275 million people facing acute food insecurity worldwide and address the looming threat of further increases in food prices and a reduced global food supply exacerbated by the war in Ukraine.

“The multilateral development banks are already providing financing to strengthen domestic food production, bolster social safety nets, and unlock trade finance,” she said in an April 13 speech to the Atlantic Council think tank in Washington. “They must also couple their near-term responses with longer-term investments to address the underlying vulnerabilities in food systems.”

The Russian invasion of Ukraine has created significant uncertainty and volatility in global commodity markets, particularly in agricultural commodities. The U.N. Food and Agriculture Organization stated that its food price index in March climbed by 13 percent, reaching an all-time high. The prices of vegetable oil, grains, and meats, in particular, soared to unprecedented levels.

Both Russia and Ukraine are among the top producers of agricultural commodities in the world—each specializing in products such as wheat, maize, rapeseed, sunflower seeds, and sunflower oil. The two nations supply nearly 30 percent of wheat and nearly 20 percent of corn in the global market. Both are also top exporters of fertilizers.

As the West imposes sanctions meant to isolate the Russian economy and the military conflict between Russia and Ukraine stifles movement out of shipping ports in the Black Sea, prices for cereals such as wheat are rising and the U.N. is warning of the potential for food insecurity in some countries.

Yellen proposes building global trade integration, imposing a global minimum tax on corporate foreign earnings, and providing poorer countries with more food and other resources to address the global economic insecurity brought on by the spread of the CCP (Chinese Communist Party) virus, the pathogen that causes COVID-19, and the war in Ukraine.

“Yes, it may seem that now is not the right time to think big. Indeed, we’re in the middle of Russia’s war in Ukraine, alongside the lingering fight against a global pandemic, and a long list of other initiatives underway,” Yellen said. “Yet I see this as the right time to work to address the gaps in our international financial system.”

The White House has made repeated warnings about the effect higher food prices could have on poorer countries in Africa, the Middle East, and Southeast Asia, but officials have said that those won’t likely affect the United States.

“It’s going to be real,” President Joe Biden said in March of the potential for global food shortages. “The price of the sanctions is not just imposed upon Russia, it’s imposed upon an awful lot of countries as well, including European countries and in our country as well.”

U.S. inflation accelerated to an 8.5 percent annual rate in March, heightening fears of a recession. Gasoline, shelter, and food were the largest contributors to the increase in costs, according to the Department of Labor.