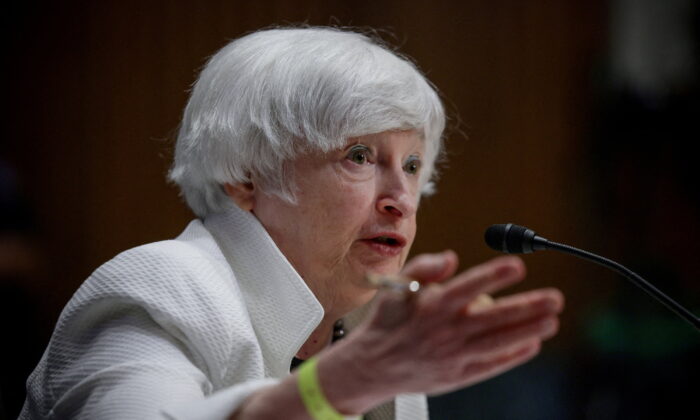 Yellen Addresses ‘Unacceptably High’ Inflation, Reveals What Biden Admin Will Do Next

Treasury Secretary Janet Yellen on Thursday stated that U.S. inflation is “unacceptably high” following a grim price level report that was issued by the Bureau of Labor Statistics a day before.

The Consumer Price Index, a key measure of inflation, rose 9.1 percent year-over-year in June—the highest figure since November 1981. Meanwhile, another indicator, the Producer Price Index, shot up to 11.3 percent, according to a government report released Thursday.

“We are taking our own steps which we believe will be supportive in the short term to get inflation down—particularly what we’re doing on energy prices and the Strategic Petroleum Reserve,” Yellen told reports in Indonesia on Thursday in reaction to the dismal numbers.

“We’re first and foremost supportive of the Fed’s efforts—what they see, deemed to be necessary to get inflation under control,” Yellen added, according to a Treasury Department transcript.

The Treasury is “taking our own steps that we believe will be supportive in the short term to get inflation down, particularly what we’re doing on energy prices, the Strategic Petroleum Reserve,” she also said, referring to the federal government’s controversial practice of releasing oil from the Reserve, which exists as a buffer of emergency oil for use during emergencies such as a war.

Conservatives have expressed outrage at the Biden administration for allowing oil from the Strategic Petroleum Reserve to be sold to China and other foreign countries, with some even floating impeachment over it.

Republicans have further argued that Biden’s policies, including his support for gigantic COVID-19 stimulus packages worth trillions of dollars, have exacerbated inflation.

The Federal Reserve, which already has hiked interest rates in recent weeks, may raise rates even more. Analysts and Wall Street traders suggested Thursday that the central bank could hike rates by as much as 1 percent later in July following the June inflation report.

Policymakers with the Fed raised the benchmark interest rate by 75 basis points for the first time since the mid-1990s and have said that another similar rate hike is on the table.

When asked about a possible recession as a result of the Fed’s actions, Yellen said that the battle against inflation “should be the top priority,” claiming the U.S. labor market is still strong despite the Fed’s policies. Almost half the increase in prices for June is due to energy costs, Yellen added, pointing to Russia, on which the Biden administration in past months has placed a lot of the blame for the inflation.

“A price cap on Russian oil is one of our most powerful tools to address the pain that Americans, and families across the world, are feeling at the gas pump and the grocery store right now,” Yellen further remarked Thursday.

Critics, however, have pointed out that energy prices were already on the rise prior to Russia’s invasion of Ukraine and the subsequent U.S.-led sanctions, pointing to a string of Biden policies that have restricted domestic oil production and shut down the Keystone XL pipeline, as well as the Federal Reserve’s delayed response, as reasons for the soaring inflation.