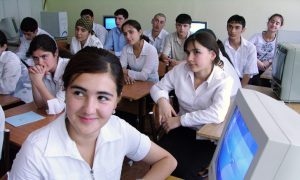 The learning standards were new. The textbooks were not.

So Curriculum Director Tammy Baumann and her team took the books apart, literally. Then they rearranged lessons, filled in holes with outside material and put it all together in what will be the K-2 math curriculum in the fall at her district in East Lansing, Michigan.

It was a time-consuming but necessary response, Baumann said, to what appears to be a near-universal lament of teachers as they page through textbooks and websites: a lack of high-quality teaching materials aligned to the Common Core Learning Standards that have been adopted by most states.

Too Many School Students Are Over-Confident

“We literally created our own curriculum … essentially creating it from scratch—creating the homework, creating the student achievement challenges,” Baumann said at the end of a school year spent collecting feedback and refining the materials.

“The need for standards-aligned curricula is undoubtedly the most cited implementation challenge for states, districts and schools,” said a May report by the Thomas B. Fordham Institute.

Publishing industry executives said some education publishers produced materials more quickly than others, but other factors have been at play. Most significant are the shift to digital learning and the lingering effects of the recession, which left many school districts without money to replace textbooks published before the new standards took hold.

Nevertheless, the appearance that standardized tests were aligned to Common Core more quickly than textbooks has added to the distrust of the more rigorous standards, which teachers largely support, said Randi Weingarten, president of the American Federation of Teachers.

“Overwhelmingly,” the union leader said, “the biggest cause of stress among teachers is not just class sizes but mandated new curriculum that are imposed without any real materials or training.”

“If you’re changing to standards that are eliciting deeper thinking and more rigor and asking kids to explain what they’ve learned, then you have to create curriculum and curricular units that are aligned with that and are engaging,” Weingarten said, “and then you have to give teachers the time to work with them and tailor them to their classes.”

Even some textbooks that said they are Common Core-aligned aren’t necessarily so, analyses have shown.

“Not only do they not cover what they should, but they cover a lot of stuff that they shouldn’t,” said William Schmidt, director of the Center for the Study of Curriculum at Michigan State University’s College of Education.

Schmidt’s analysis of 34 widely used math textbook series found that those released after 2011 were, predictably, better aligned to Common Core than older ones but still left out about 20 percent of the standards.

Such findings have given rise to a nonprofit website funded in part by the Bill & Melinda Gates Foundation, EdReports.org, which reviews materials for alignment and quality.

Schmidt and others said publishers appear to have been slow to fully invest in Common Core, perhaps while waiting to see whether the standards would last, especially given the political debate that has led some states to drop them.

“I’m sure there were publishers who did say, ‘Let’s think about this,'” said Jay Diskey, executive director of the PreK-12 division of the Association of American Publishers, “but others went quickly into the Common Core transition,” developing instructional material off of the grade-by-grade standards.

“Frankly, the prospect of the entire nation, schools in all 50 states, swapping out reading and math for new Common Core materials represented the largest market opportunity ever in United States K-12 education publishing,” Diskey said. “It hasn’t fully materialized yet, simply because of some of the political issues and the still-lingering effects of the recession in some of these school districts.”

In the meantime, the so-called OER movement—short for open educational resources—continues to take hold, with anyone from teachers to states making curriculum available for free or for sale online.

The biggest such effort is the EngageNY website created by that state’s Department of Education with federal funding. The free site includes complete K-12 English Language Arts and math curriculums, including downloadable lessons that can be printed out.

State data showed more than 20 million downloads of material from the site as of early June, with a third of downloads initiated from outside New York as districts like Berkeley, California, adopt it.

“That, to me, is a pretty good proof point that no matter where you are, teachers and school districts are just not that happy with the quality of material that’s available to them through traditional commercial publishing routes,” said Robert Pondiscio, a senior fellow at the Fordham Institute.

AFT’s teacher-fed “Share My Lesson” site has attracted 750,000 teachers and has seen more than 9 million downloads of materials since launching in 2012, Weingarten said.

“Some of the popularity of sites like Teachers Pay Teachers is the lack of resources that teachers had to work with,” Jones said. “We were expected to teach these standards, but we weren’t really given the tools to teach them.”