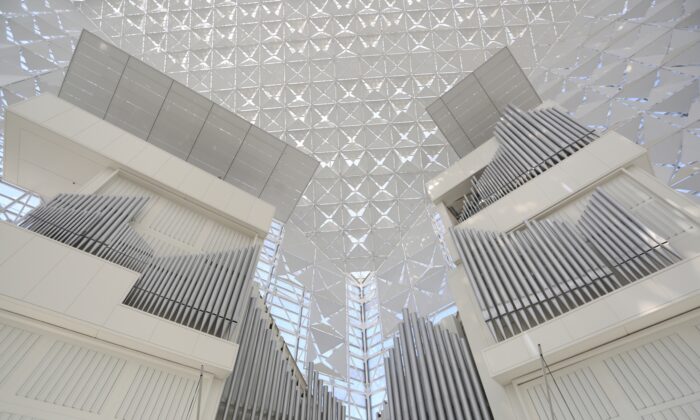 The Hazel Wright Organ was built in 1982 and is named after the Chicago-area donor, Hazel C. Wright.

The Hazel, as it’s called, was restored using funds from diocese donors. According to spokesperson Jarryd Gonzales, the restoration effort cost about $3 million, began almost a decade ago, and was only just finished this year.

The Orange Catholic Foundation is seeking to raise another $3 million, which would keep the iconic organ playing “in perpetuity,” according to a statement sent to The Epoch Times. The instrument features more than 17,000 pipes and 300 stops, and nearly 300 ranks.

This 2022-23 Year of Hazel concert series is presented by The Roman Catholic Diocese of Orange, The Orange Catholic Foundation, and the music ministry of Christ Cathedral.

The cathedral is known worldwide, first as Crystal Cathedral, where televangelist Robert Schuller held his “Hour of Power” telecasts with music provided by the Hazel. The diocese bought the property in 2011. Schuller died in 2015 but grandson Bobby has continued the “Hour of Power” from the Shepherd’s Grove church in Irvine.

“Our Year of Hazel series will give music lovers everywhere a better chance to hear more of what this amazing instrument is truly capable of,” David Ball, the cathedral’s music ministry director and principal organist, said in the statement.

The organ gives listeners a unique, powerful “surround sound” experience as the pipes play from all four corners of the cathedral.

Besides special concerts and ceremonies—such as upcoming solo recitals and an interfaith choral festival—the Hazel Wright Organ will be regularly used for Mass held at Christ Cathedral.

“The organ plays an important part in the Mass,” the Bishop of Orange, Kevin W. Vann, said in an email statement to The Epoch Times. “It encourages people to pray and sing, and to hear the presence of God in a way that really nothing else can do.”

Bishop Vann also took part in the restoration of the organ, because he wanted to show the public and congregants that, “The Catholic church was going to appreciate this instrument and rebuild her, to help her sing again with the glory of God.”

The Bishop blessed the iconic pipe organ during a special ceremony on June 10, with a special performance by Josep Solé Coll, now the first organist of the Papal Basilica of St. Peter and for the liturgical celebrations of Pope Francis.

The series will begin Sept. 30 at 7:30 p.m. at the Christ Cathedral with a screening of a documentary highlighting the history of the organ. A question-and-answer session will follow with the Fratelli Ruffatti organ-building company that restored the organ, led by Michael Barone, host of the American Public Media’s “Pipedreams.” A performance by Hector Olivera—a world-renowned organist—will cap the night.

The season of music will end with a grand performance in June 2023 by the Pacific Symphony and the Pacific Chorale—accompanied by Grammy-winning organist Paul Jacobs.

A complete list of concerts, ticket information, and other events is available on the Christ Cathedral’s website.